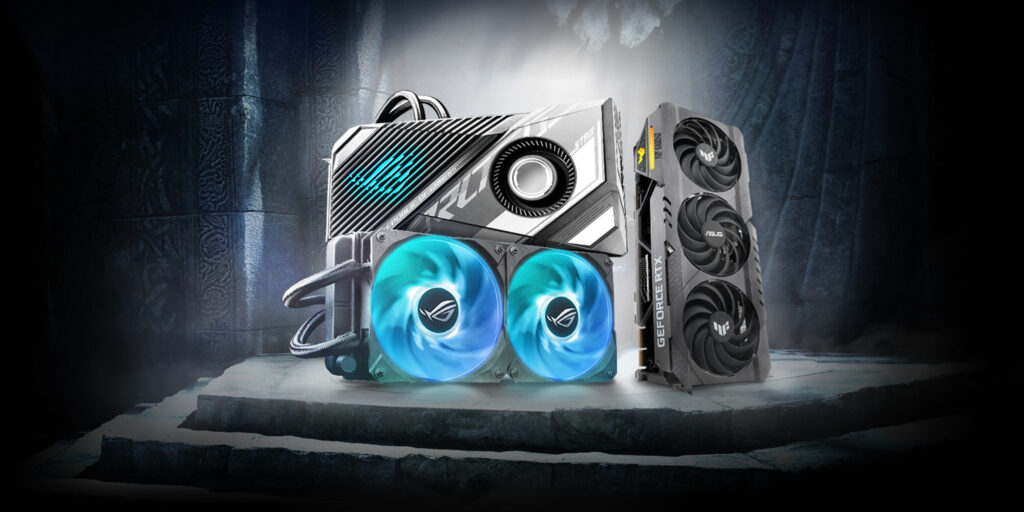 Designed for the most demanding gamers, content creators and data scientists, the NVIDIA® GeForce RTX 3090 Ti features a record-breaking 10,752 CUDA cores, and boasts 78 RT-TFLOPs, 40 Shader-TFLOPs and 320 Tensor-TFLOPs of power. And It’s packed with 24 GB of the fastest 21 Gbps GDDR6X memory, providing 1 TB/s of memory bandwidth.

Both ASUS cards leverage a variety of upgrades and exclusive features to get the most from this boundary-breaking GPU. 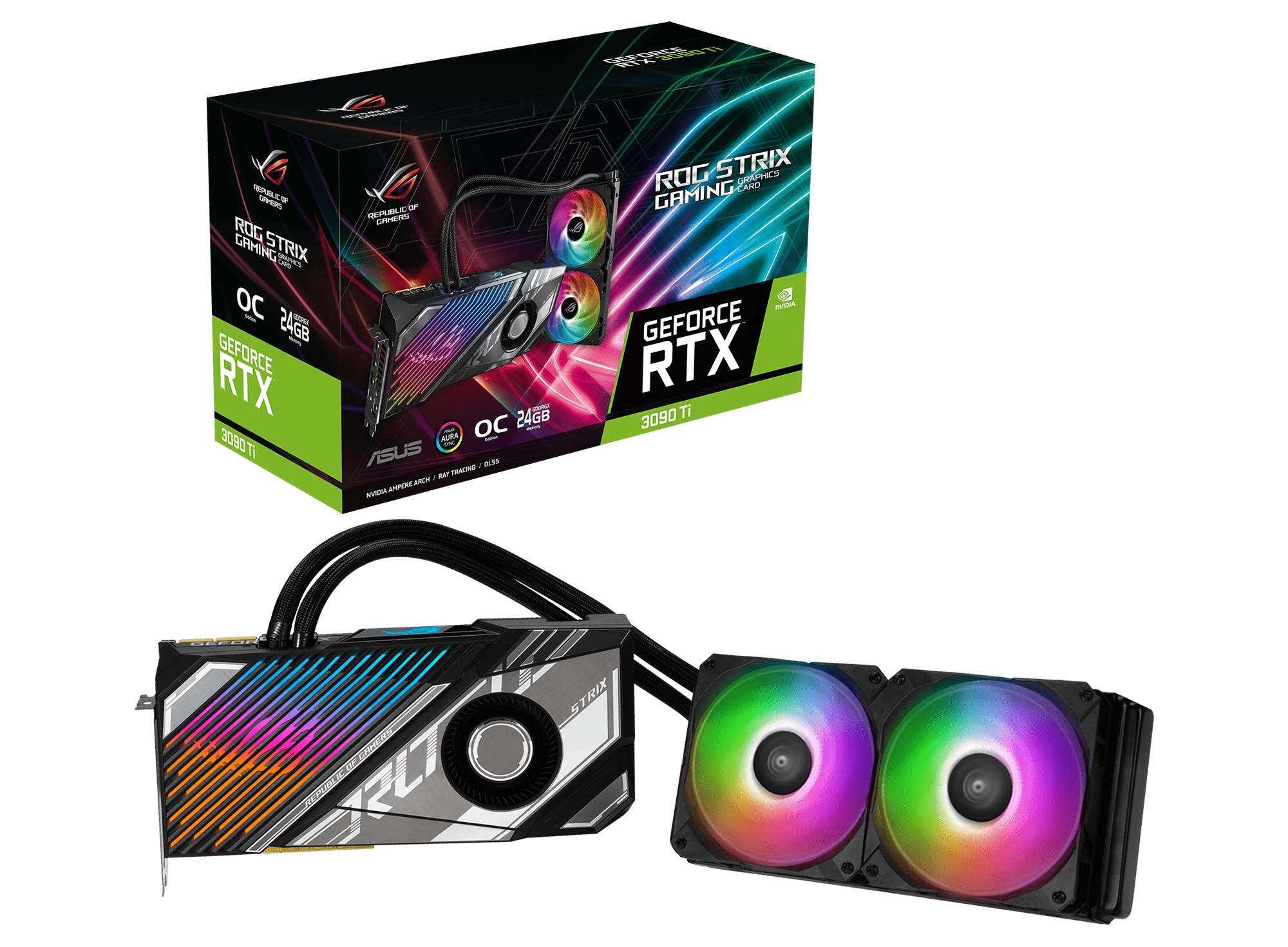 The ROG Strix LC GeForce RTX 3090 Ti glides in with a closed-loop liquid cooling system that keeps temperatures and noise levels under tight control. It starts with a custom-designed cold plate that extends over the GPU die and the onboard GDDR6X memory. This assures premium cooling for the components most responsible for raw performance. Then, 560 mm tubing gives users flexible options for installing the radiator, even in larger cases or builds that also feature an AIO CPU cooler. The 240 mm radiator is cooled by a pair of 120 mm ARGB fans tuned to move large quantities of cooling air at high static pressure. A blower-style fan and a low-profile heatsink under the shroud expel the heat produced by the power delivery components, all in a slim 2.6-slot design.

A suite of features makes this graphics card easy to install and set up for long-term performance. Power-sensing circuitry gives users a heads-up through a static LED light if they’ve neglected to connect the card to their PSU through its 1×16-pin power connector. That same light will pulse if the graphics card is receiving insufficient wattage. Two FanConnect II headers allow users to connect case fans to the graphics card to increase airflow when the GPU is under load. A dual-mode BIOS switch offers a choice between the highest cooling performance and clocks, or quieter operation and a mild step back in performance. Finally, 0 dB tech allows the graphics card to automatically drop into silent running mode at idle and light loads.

The ROG Strix LC GeForce RTX 3090 Ti graphics card is ready-made for a showcase build. Angular text and parallel lines adorn the card’s shroud. Addressable RGB LEDs on the shroud, bridge and radiator fans case a vivid glow across the interior of a build, and users can easily coordinate lighting effects with the rest of their Aura-compatible gear using Aura Sync. 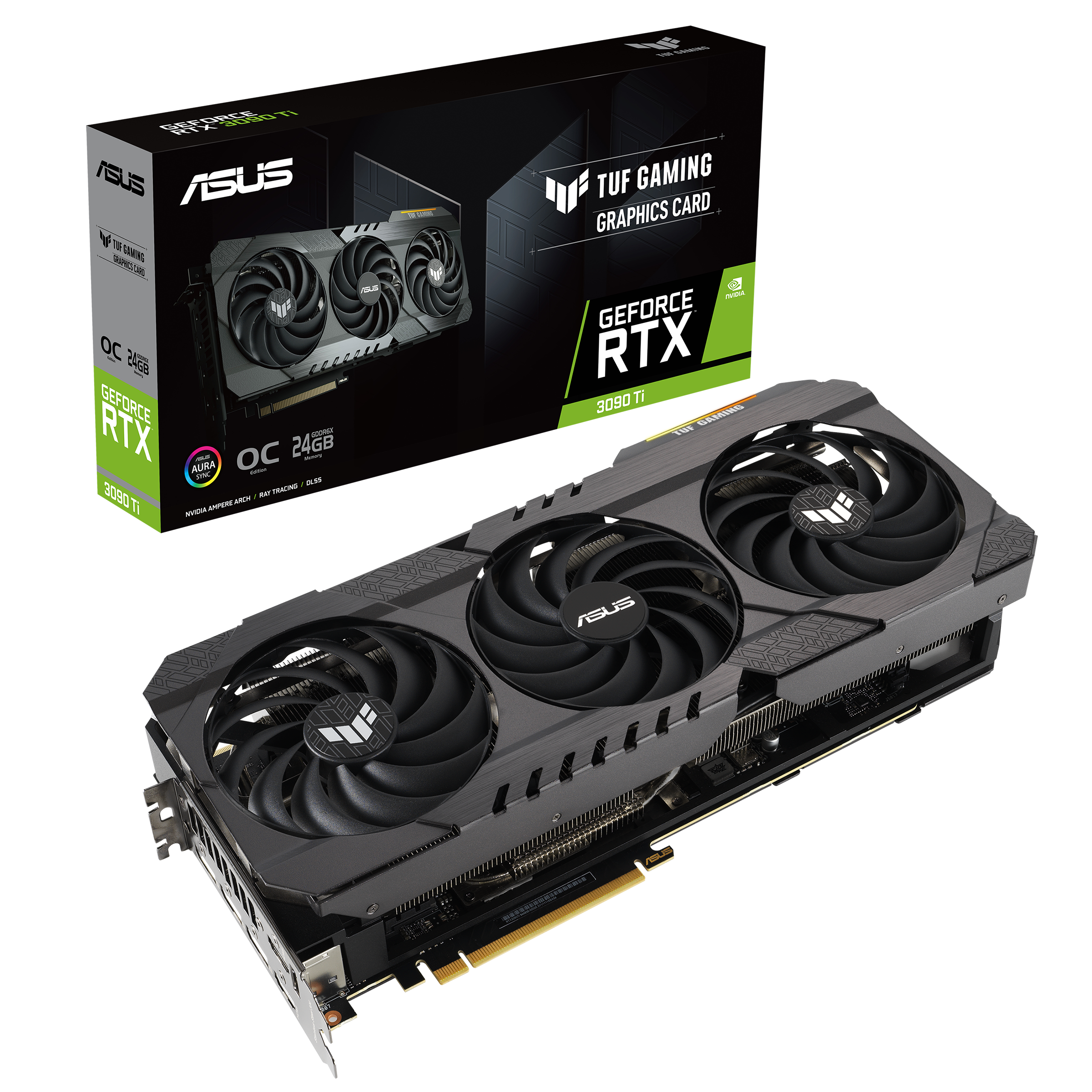 A new thermal solution sets up the TUF Gaming GeForce RTX 3090 Ti for air-cooled supremacy. For DIYers looking for rock-solid reliability and impressive performance in a straightforward, no-nonsense design.

It starts with an angular, matte black metallic shroud with rugged industrial design cues. This covers a massive 3.2-slot heatsink that is ready to keep GPU, VRAM, and power delivery circuity chilly, even under demanding loads.

A trio of Axial-tech fans push plenty of air through the high-surface-area heatsink. ASUS has increased the width of each fan to 1.5 cm to increase static pressure, and all three fans have a half-width barrier ring that focuses air right where it is needed. The central fan rotates clockwise, while the two on the flanks spin counterclockwise to reduce turbulence. This proven design allows higher RPM and more air movement through the heatsink without a corresponding increase in acoustic footprint. A dedicated memory heatsink keeps the massive complement of GDDR6X memory cool for reliably swift performance, and a 0dB fan-stop mode allows the card to maintain silent running under light loads or at idle. The full-length backplate shows off plenty of TUF Gaming graphics, and a large cut-out ahead of the PCB provides another route for hot air to exit the heatsink.

The TUF Gaming GeForce RTX 3090 Ti graphics card also features many enthusiast-friendly touches that level up the capabilities of a build. Auto-Extreme assembly technology, used across the ASUS lineup, precisely places and solders components without human intervention to boost reliability and build quality. A 144-hour testing regime and military-grade capacitors ensure out-of-the-box reliability and a long service life. And users will be able to personalize their TUF Gaming card to match the rest of their system using the onboard Aura RGB LEDs, as well.

Pair with an ROG Thor II or ROG Strix PSU

As part of their formula for establishing a new tier of performance, these GeForce RTX 3090 Ti graphics cards draw more power than their predecessors. To get the most out of them, ASUS recommends a power supply with 1,000 watts of capacity or more, depending on the specs of the rest of the user’s system. The ROG Strix and ROG Thor families of PSUs are already prepared to handle the demands of these cards, thanks to their premium components, massive internal heatsinks and ASUS-exclusive Axial-tech fan design.

For those who dare to demand the best

[i] Specifications, content and product availability are all subject to change without notice and may differ from country to country. Actual performance may vary depending on applications, usage, environment and other factors. Full specifications are available at http://www.asus.com