ASRock’s flagship Taichi boards are the most top-end options, and on some gaming segment there are Phantom Gaming X series boards, which, although for gamers, have the coolest sets of peripherals, etc. The B550 Taichi comes in a very big box with a hinged cover on top of the box, which the board itself is visible. Steel cold color, gears of a perpetual mechanism. 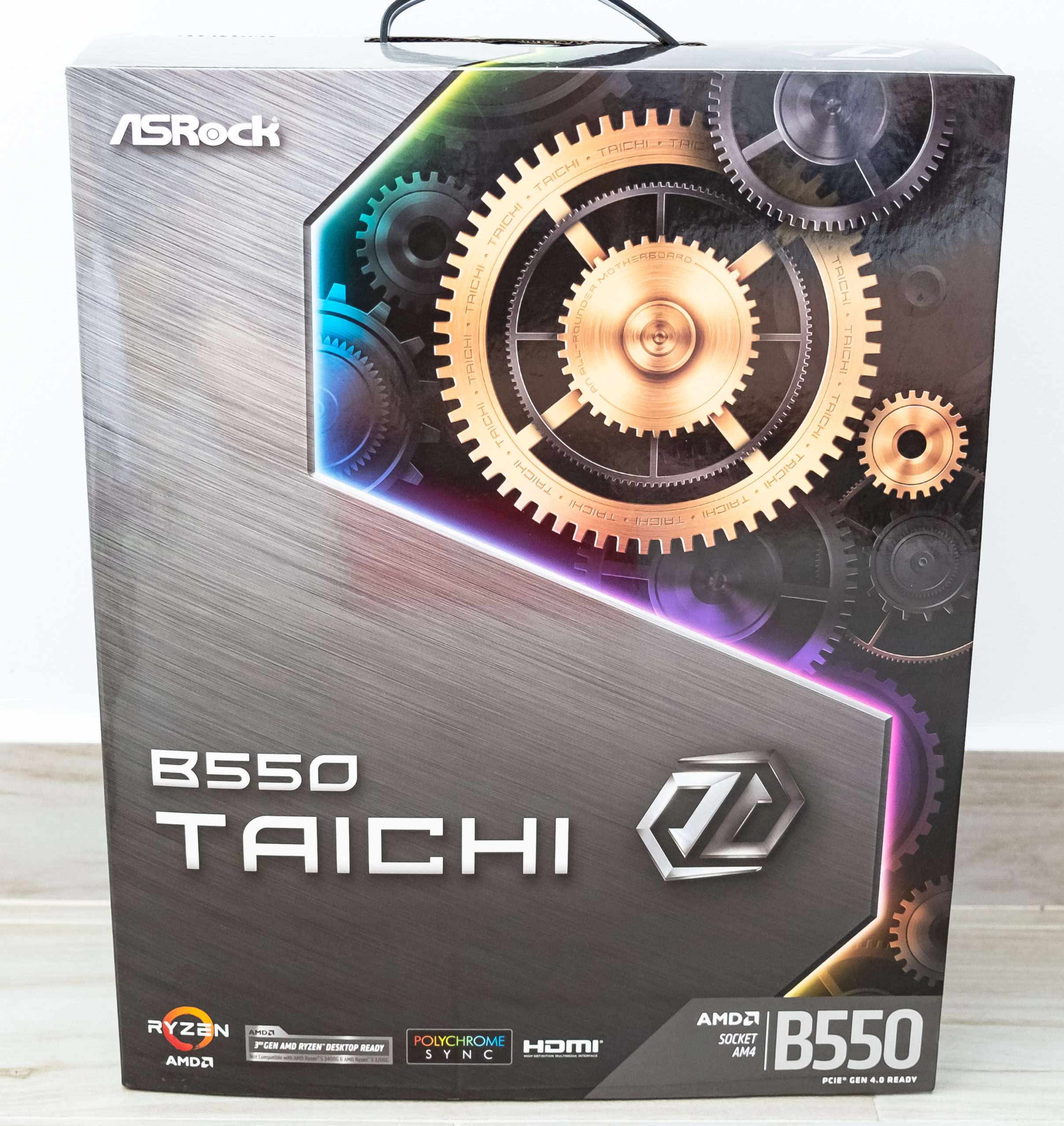 The ASRock B550 Taichi motherboard design theme: bronze and black color scheme with three customizable RGB LED zones. The board included with 16+2  phase power delivery for CPU and RAM and where the two PCIe slots support a PCIe 4.0 x8/x8 in Crossfire X configuration. 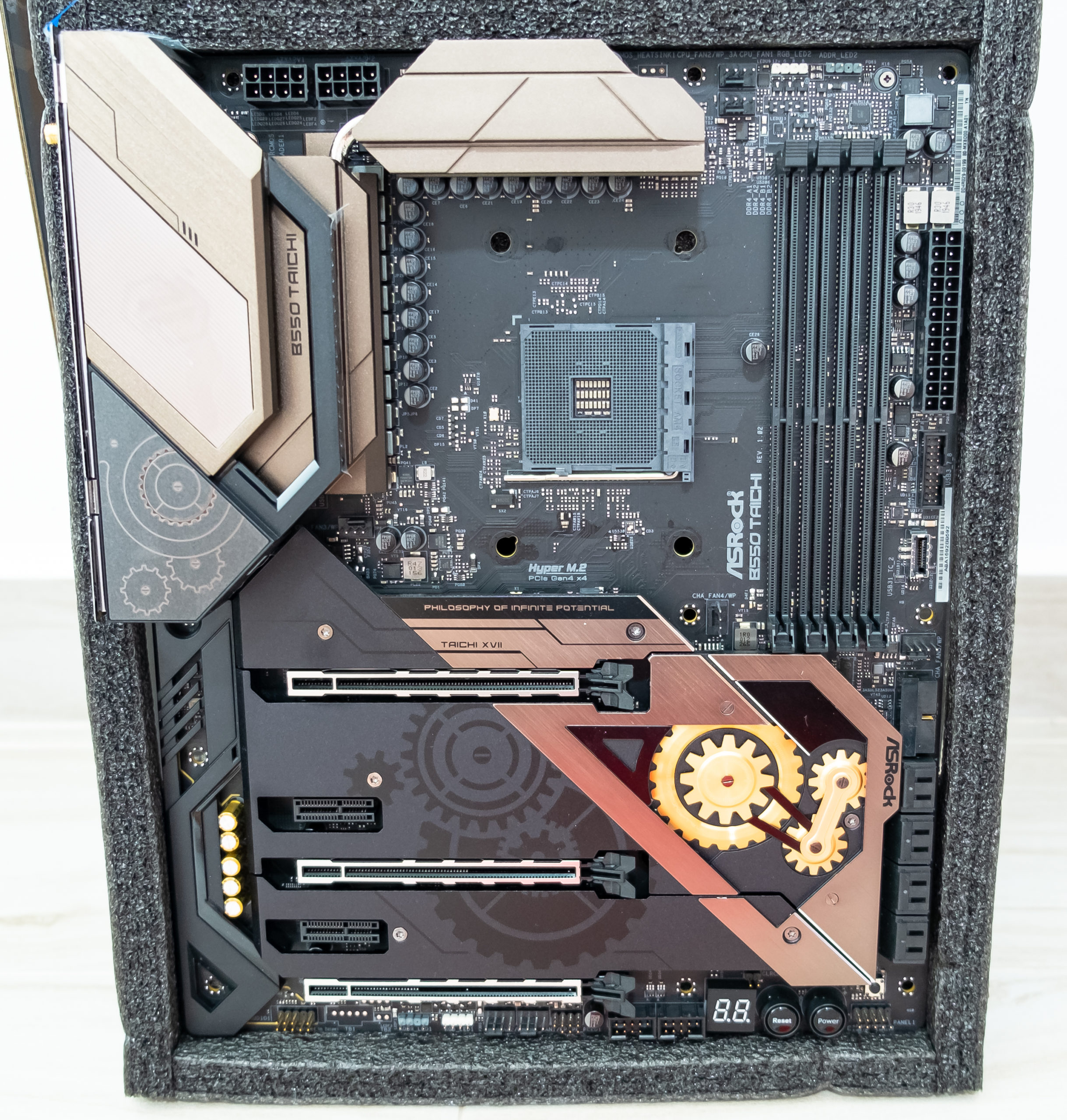 The ASRock TRX40 Taichi motherboard isa ATX form factor, measures 305 × 244 mm and 10 mounting holes for installation in the case. The board is equipped with a metal protective plate on the back. The plate does not have an insulating coating, but is installed at a distance of 3 mm from the PCB, so there should be no problems with short circuits. 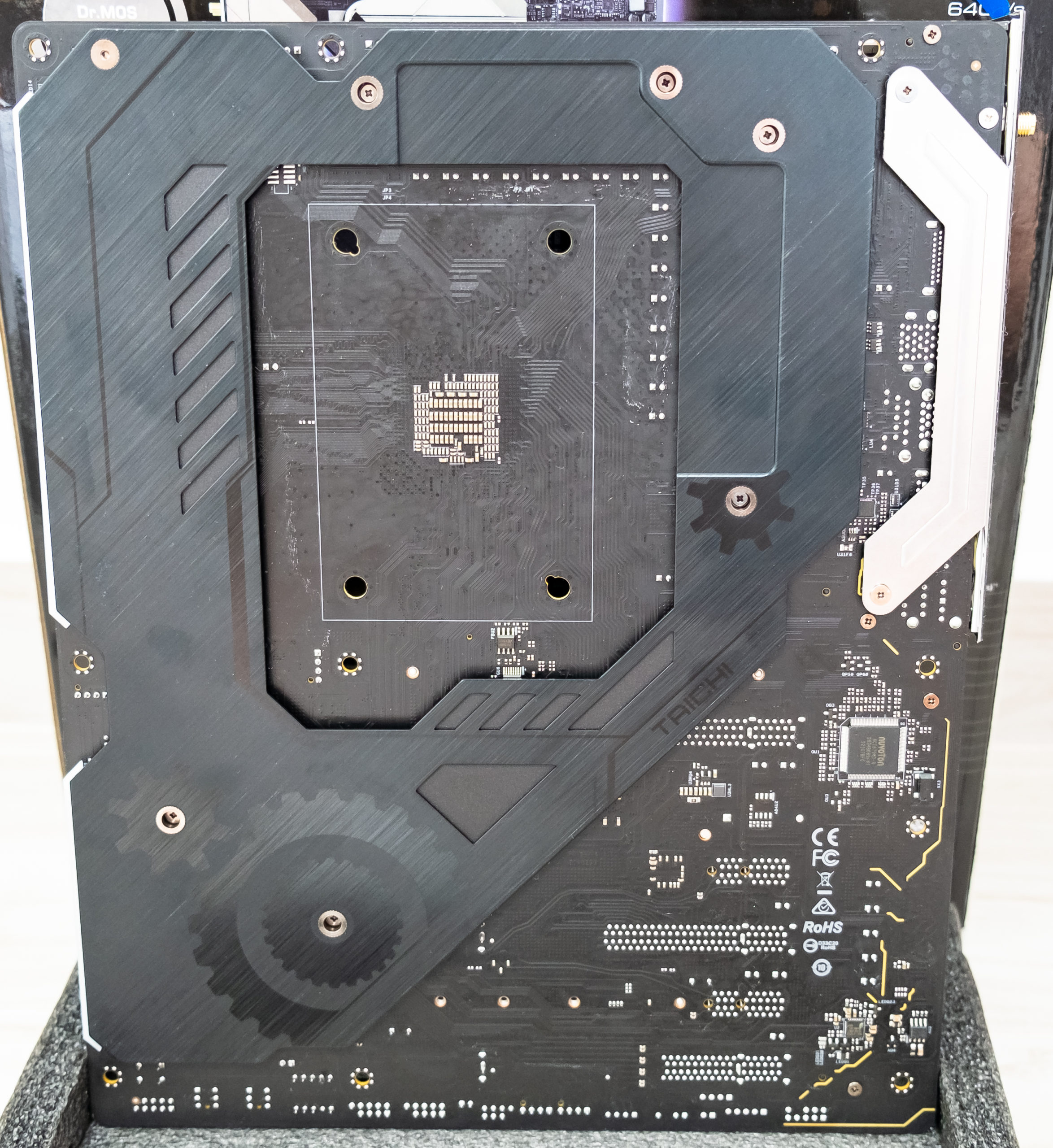 On the back I/O panel of connections including two USB 2.0 Type-A, a USB 3.2 Gen2 Type-C and four USB 3.2 Gen1 Type-A ports, as well as a DisplayPort 1.2 and HDMI video output. In addition a total of five 3.5mm audio jacks with a S/PDIF optical output. Touching on the networking capabilities of the Taichi reveals Intel 2.5 Gigabit LAN port with one powered by latest Intel I225-V of 2.5 Gigabit NICs. Also present on the rear panel is a set of antenna connectors for the integrated Intel AX201 802.11ax WIFI6 adapter with wireless speeds up to 2.4Gbps and Bluetooth 5.1. The small button beside display port is to update bios by using “USB Flashback” and makes it easy for user to update bios and troubleshooting. For power users will love this little feature: Debud LED, Reset button and Power button.
In addition, a small CMOS reset button is visible on the right bottom. There is a jumper on the top side of the LED for the same purpose. 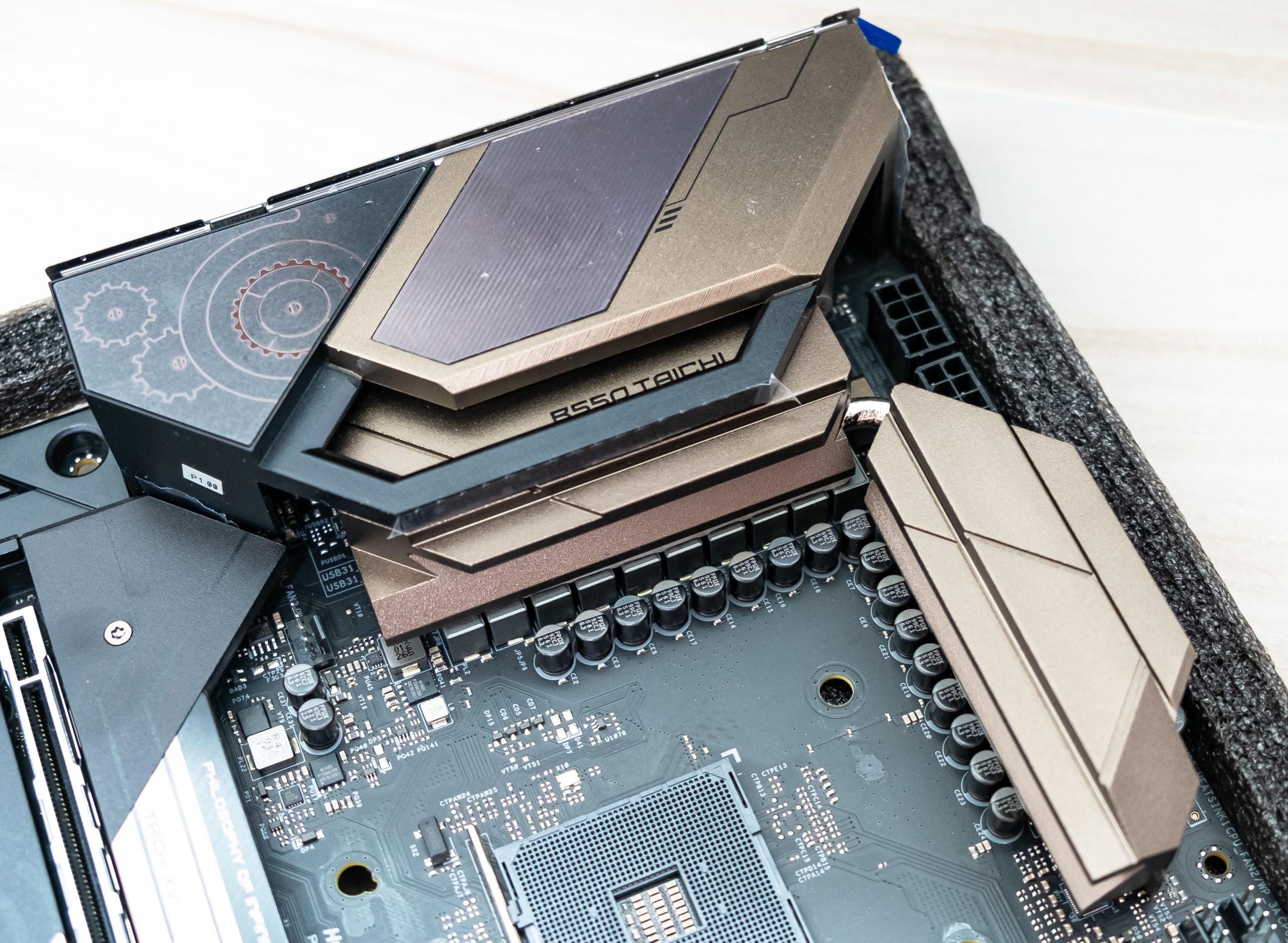 The PWM cooling is a pair of bronze-colored aluminum heatsinks, which are interconnected by a single copper heat pipe. On both of the heatsinks is a relatively thick thermal pad. 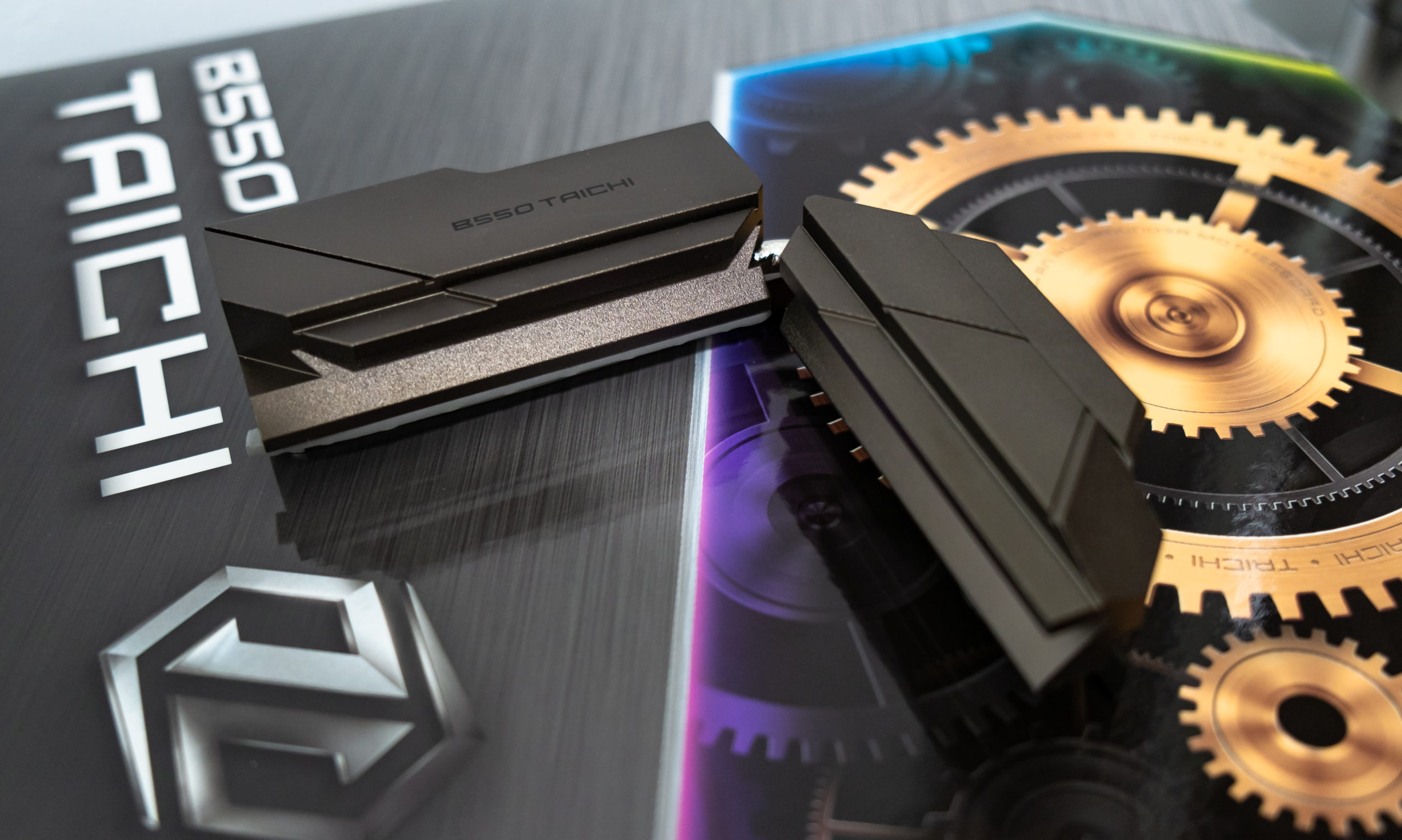 The ASRock B550 Taichi is made up of a 16-phase design with fourteen phases for the CPU, and two for the SoC. It’s use 16 Vishay SiC654 50A DrMos power stages which makes up both the CPU and SoC sections.  The B550 Taichi’s phase doubler is the Intersil ISL6617A with seven doubling up the fourteen CPU power stages and one doubling up the two SoC phases. Providing power to the power delivery is a pair of 12 V ATX CPU power inputs.

The PWM controller: Intersil ISL229004, which is an 8-channel controller which means the power delivery is operating in a 7+1 configuration. 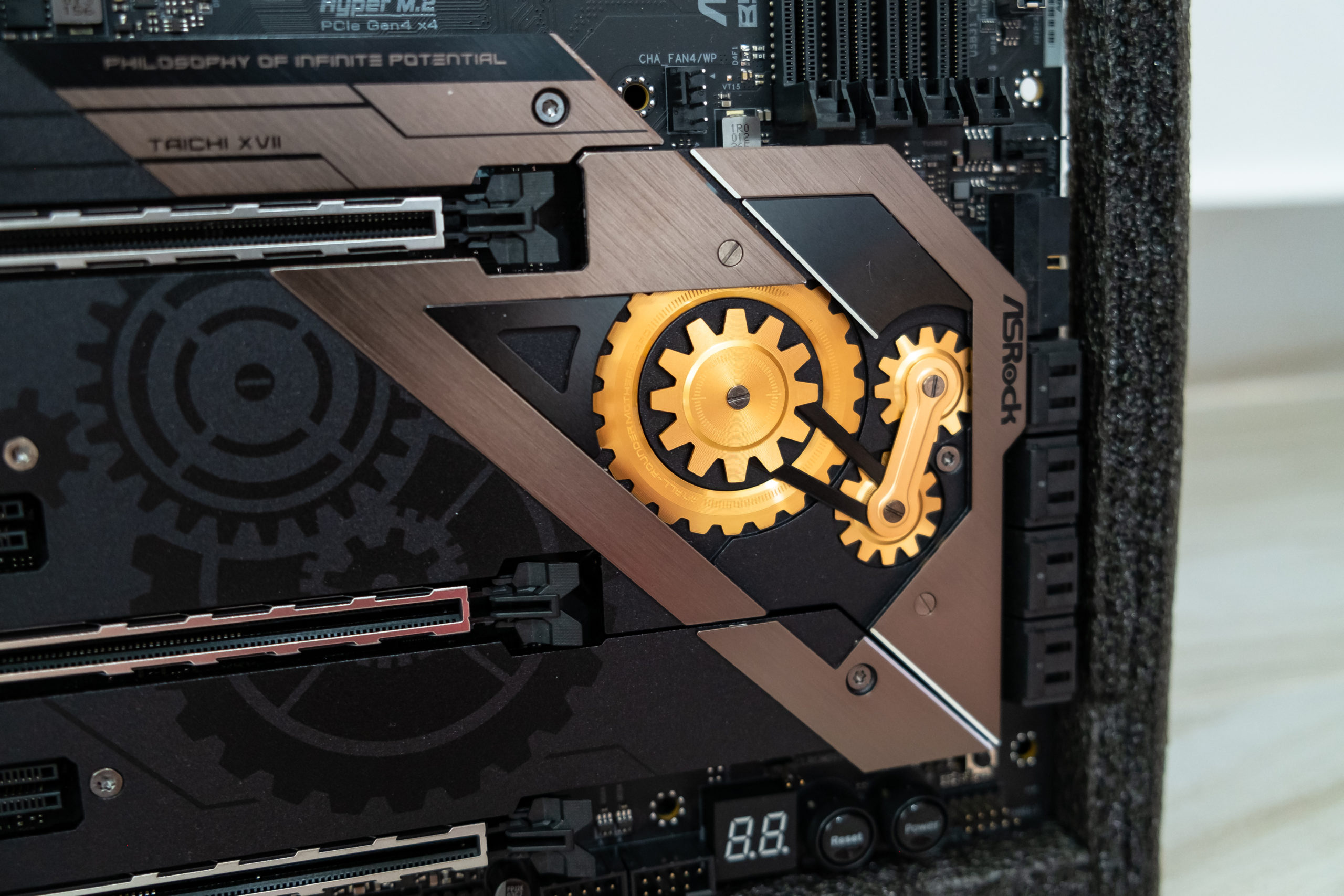 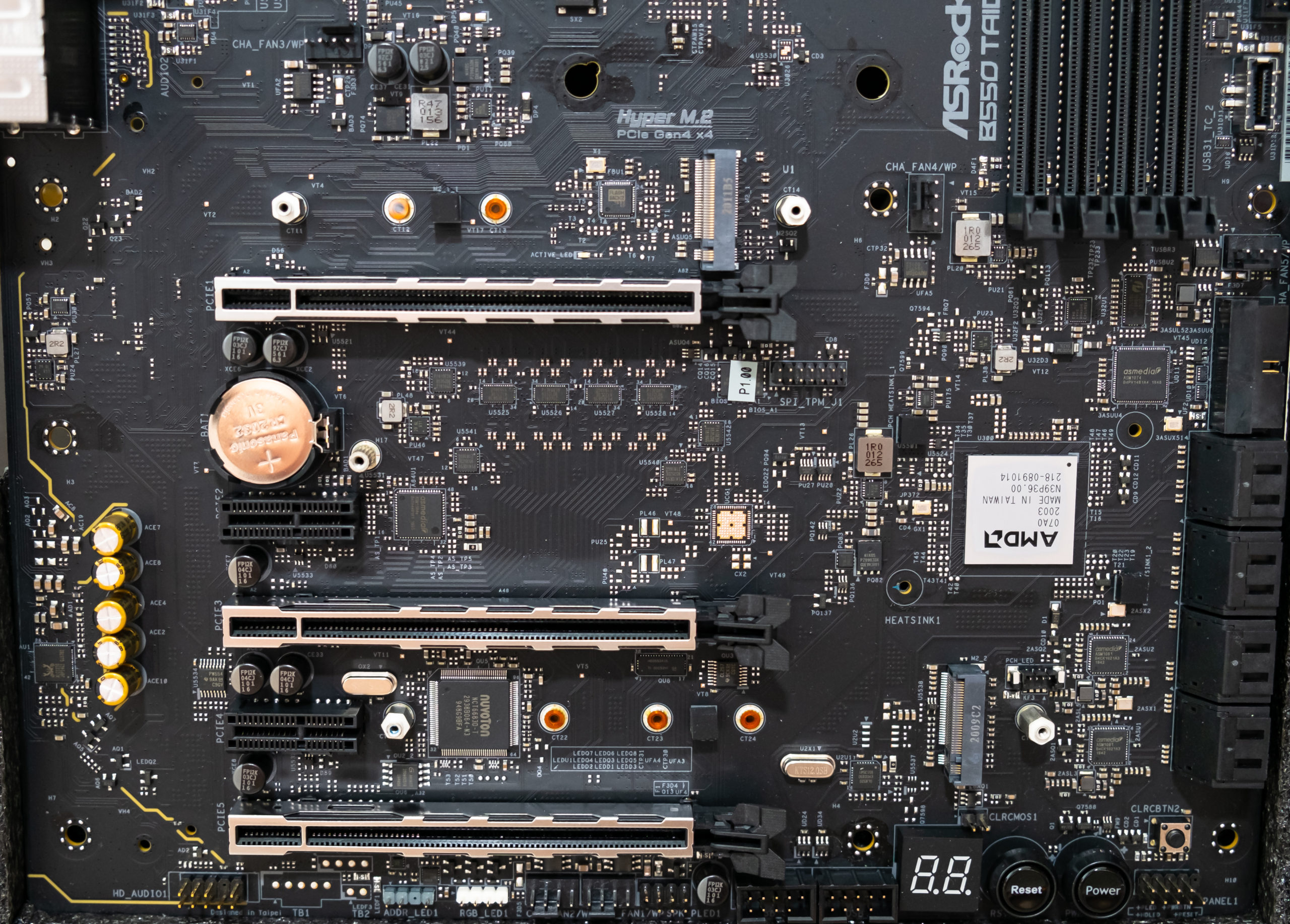 The Realtek ALC1220 manages the sound with Nichicon Fine Gold audiophile capacitors and NXP’s NE5532 is an headset amplifier which can drive headphones and headsets up to 600 Ohm. 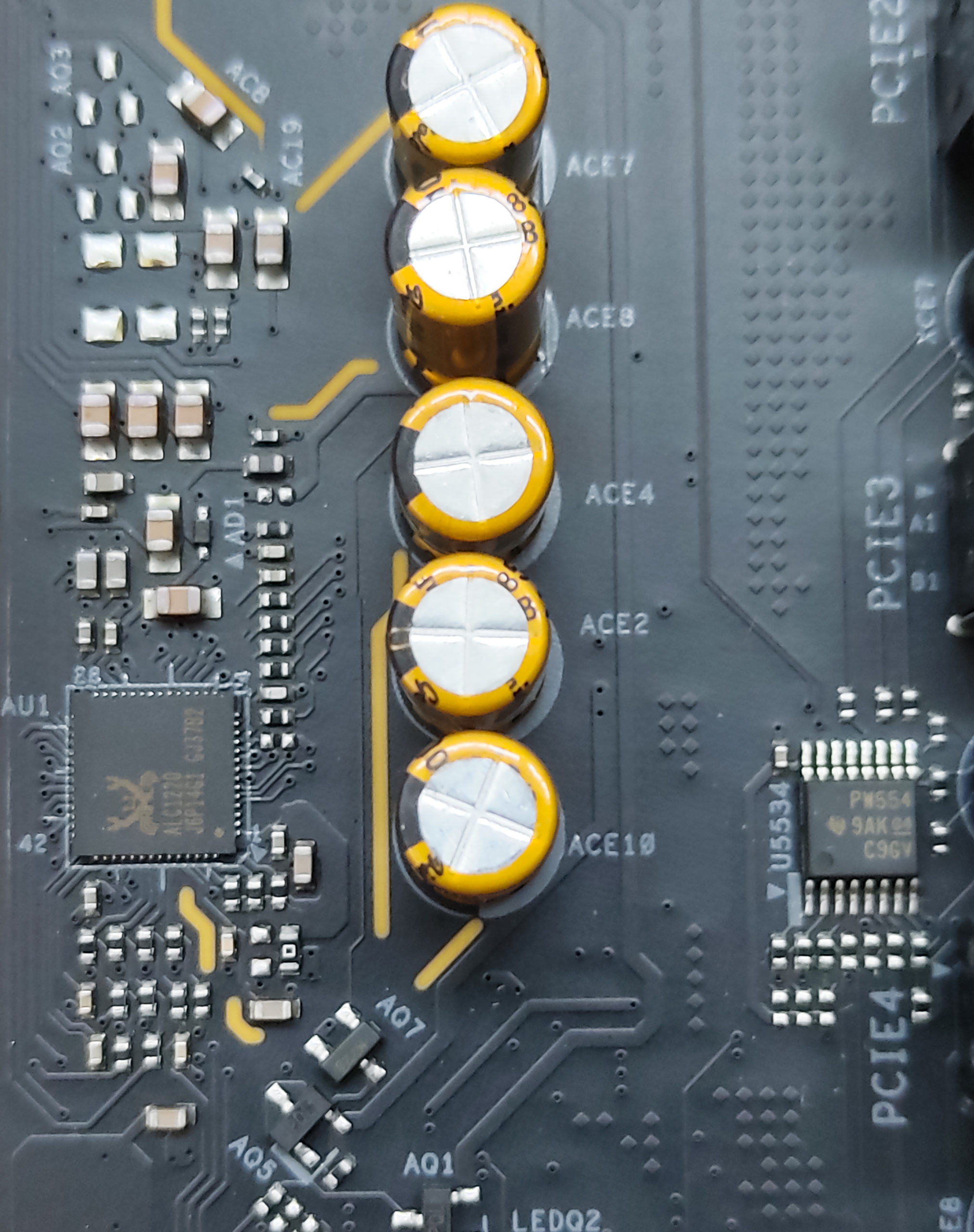 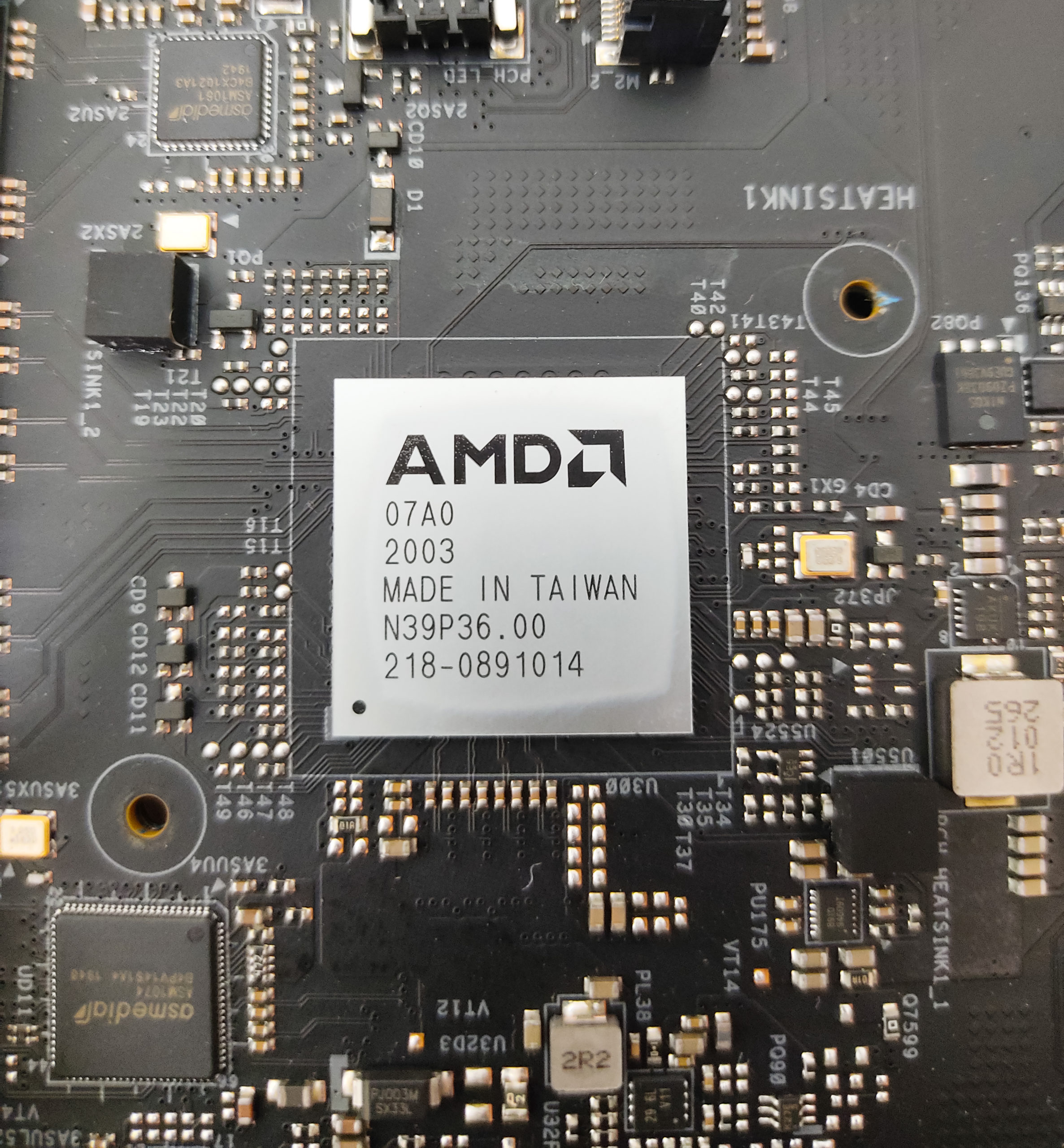 Layout of the board:

So, in addition to USB ports, which we will come to later, the B550 chipset has 16 free PCI-e lanes. We count how many lines are spent on support (connection) with this or that element in the B550:

Audio codecs / channel Realtek ALC1220 use USB ports to communicate with the chipset, 2 more USB 2.0 lines are spent on the internal ports (4 USB 2.0 ports are used up by default).

We’ll come back to this in the section on USB ports. 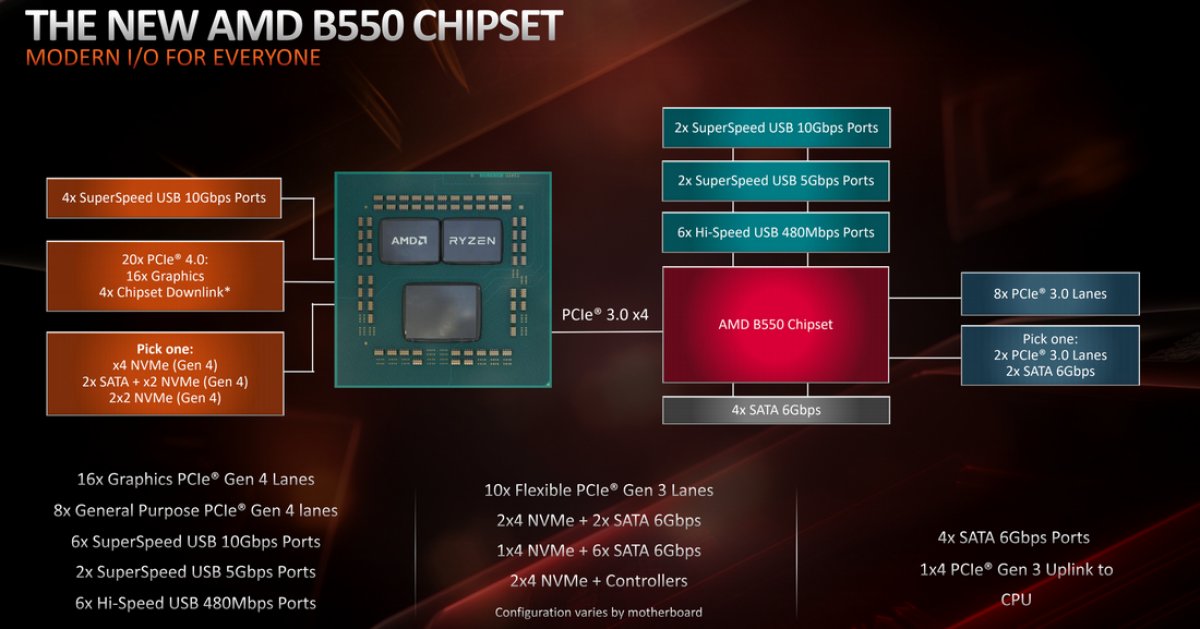 Now let’s take a look at how the processor works in this configuration (remember that it has 24 free PCI-e lanes).

So, all lines are fully distributed.

Obviously, PCI-e lines are enough for all occasions, so you can safely install two to three video cards for AMD CrossFire (they will still get  two x8 and one 4x). For those who are suddenly not enough of two video cards, they can install three “radeons” in AMD CrossFireX mode, although such variants with three cards are extremely rare now. The unused PCI-ex16 slots can be used for any peripheral, including NVMe drives, creating very fast RAID arrays (for example, the complete ASRock Hyper M.2 card. And this board, the distribution chip PI3DX multiplexers from Pericom. PCIe bandwidth between PCIe lane to others hardware such as Intel LAN, Intel AX WIFI and others. All fast USB 3.2 Gen1 / 2 Type-A / Type-C ports are equipped with PI3EQX1004B1 re-drivers from Pericom and ASM1464 from ASMedia, giving a steady voltage, capable of fast charging mobile gadgets through them.

Control over the synchronization of the RGB / ARGB backlighting is assigned to the NUC121ZC2 chip from Nuvoton (ARM-, it also monitors the state of the board. 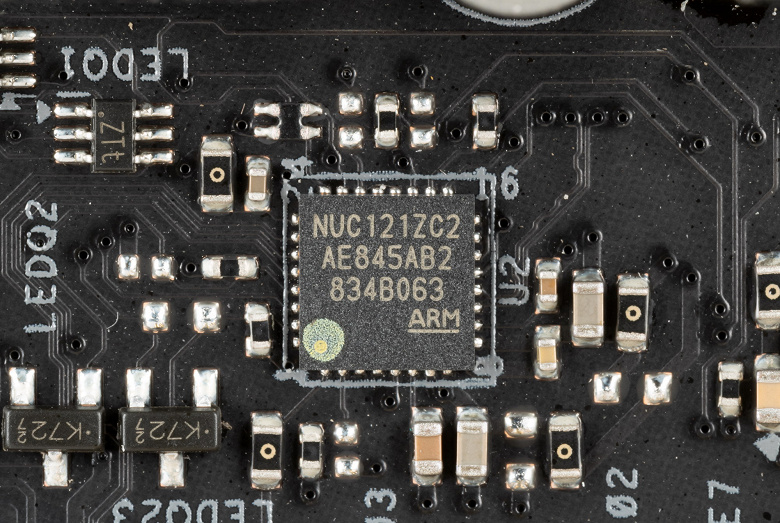 All sockets are controlled through software or BIOS: fans can be controlled either through PWM or by trivial voltage / current changes. The same sockets are also suitable for connecting pumps.

The CO is controlled by an APW8828 controller from Anpec Electronics, which leads the power circuit for the sockets. The NUC121Z controller from Nuvoton (monitoring), as well as NCT6796 from the same Nuvoton (Multi I / O), are closely related to it. The FAN Tuning utility is responsible for the control of the entire set of fans / pumps, and control is also implemented in the UEFI / BIOS settings. There are RGB light up on the back of the motherboard.

How We Test ASRock B550 Taichi?

AMD B550 Taichi is a high-end motherboard from ASRock. As such, our workstation, based on an B550 Taichi motherboard and AMD Ryzen 3600X 8cores 16 threads processor.  The ram we will be using is  G.Skill’s F4-3600C16D- 16GTZNC memory kit. Zotac GeForce RTX 2080AMP Extreme graphics card and ADATA SX8200 500Gb M.2 NVMe SSD is used as well to run with benchmark.

Notice: Benchmark will be merge and update on this page, when we have done with upcoming Intel board review. Geekbench 5 measures your hardware’s power and tells you whether your computer is ready to roar. How strong is your mobile or desktop system?