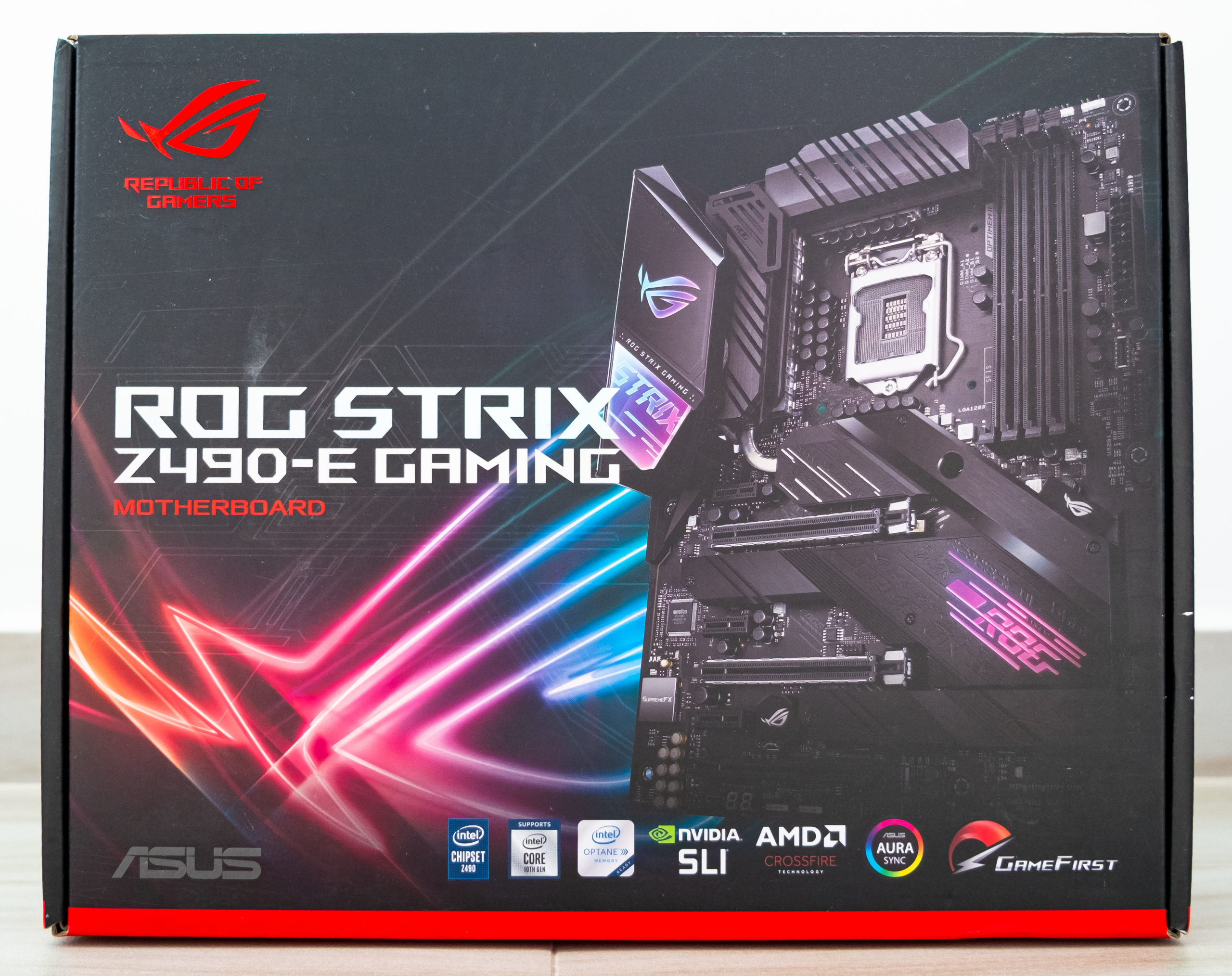 The ASUS ROG STRIX Z490-E Gaming motherboard is an ATX sized offering which is primarily targeted towards enthusiasts, gamer and users looking to push the envelope on the new Intel 10th Gen Core processors, such as the Core i9-10900K and Core i7-10700K. The Z490 boards doesn’t support 9th Gen, so there won’t be backward compatible. This model sits quite high up in the product segment and offers users latest Intel I225-V 2.5Gb LAN, two PCIe 3.0 x4 M.2 and a total of six SATA ports. ASUS has taken the unique STRIX design and implemented the new Z490 chipset into the mix for a high-performance and feature-packed offering designed for enthusiasts looking to push the new Intel processors.

On the back I/O panel of connections including four USB 2.0 Type-A, a single USB 3.2 Gen2 Type-C and four USB 3.2 Gen2 Type-A ports, as well as a DisplayPort 1.2 and HDMI video output. In addition a total of five 3.5mm audio jacks with a S/PDIF optical output. Touching on the networking capabilities of the Z490-E Gaming reveals Intel 2.5 Gigabit LAN port with one powered by latest Intel I225-V of 2.5 Gigabit NICs. Also present on the rear panel is a set of antenna connectors for the integrated Intel AX201 802.11ax WIFI6 adapter with wireless speeds up to 2.4Gbps and Bluetooth 5.1.

The board comes with the latest Intel AX201NGW wireless M.2 card. It’s support Bluetooth 5.1 and the antenna 2T2R Wi-Fi 6 technology, including new features such as:

Intel® Wi-Fi 6 AX201NGW is a CRF module that uses the Intel proprietary interface, and thus can only be used with select Intel chipsets and platforms.

The board uses a custom Digi+ PWM chip to control 14+2 power phase for deliver power to Intel Processor. The VRM heatsinks are hefty and a copper heat pipe that stretches round the CPU socket.

They working as a team to deliver high efficiency power to Intel CPU and IGPU. Each individual phase is complemented with a dedicated choke and capacitors throughout. Please take note the power phase aren’t parallel design.

Below the Intel Socket spotted a VCCSA and VCCIO power phase.

The ROG SupremeFX 8-Channel Realtek High Definition Audio CODEC S1220A with Dual OP Amplifiers. With a dual supply op amp, the output AC signal is able to raise high on V+ “Positive Voltage” and on the low V- “Negative Voltage”. Unlike a sinlge supply op amp which is connected to ground and cuts off at the 0V line, a dual supply op amp can go negative, as far negative as the negative voltage fed into V-. So the sound produce depth in sound stage and you need to match with a good speaker to hear the difference. ASUS also pair with Japanese Nichicon electrolytic capacitors to  make the sound more than decent, and they are able to perform neutral, but  powerful in bass.

To access to the top M.2 port and you need to remove a large plastic covers to get the port, very troublesome. The bottom slot is a M.2 for you to insert another M.2 and both support PCIe 3.0 NVMe SSD.

Benchmark the speed of your PC computer hardware