Xiaomi launched a new entry-level Redmi Note 9S smartphone in 2020. While our review unit costs SGD $299, it does come with 4 GB RAM and an 64 GB of storage.

The Redmi Note 9S includes many refinements over its predecessor, with its new quad rear-facing camera array being one of the greatest. The device has a 48 MP primary camera, an ultra-wide-angle sensor, macro sensor and  depth-of-field sense. Xiaomi has upgraded its Redmi Note series to the Qualcomm Snapdragon 720G, which also includes an Adreno 618 GPU. 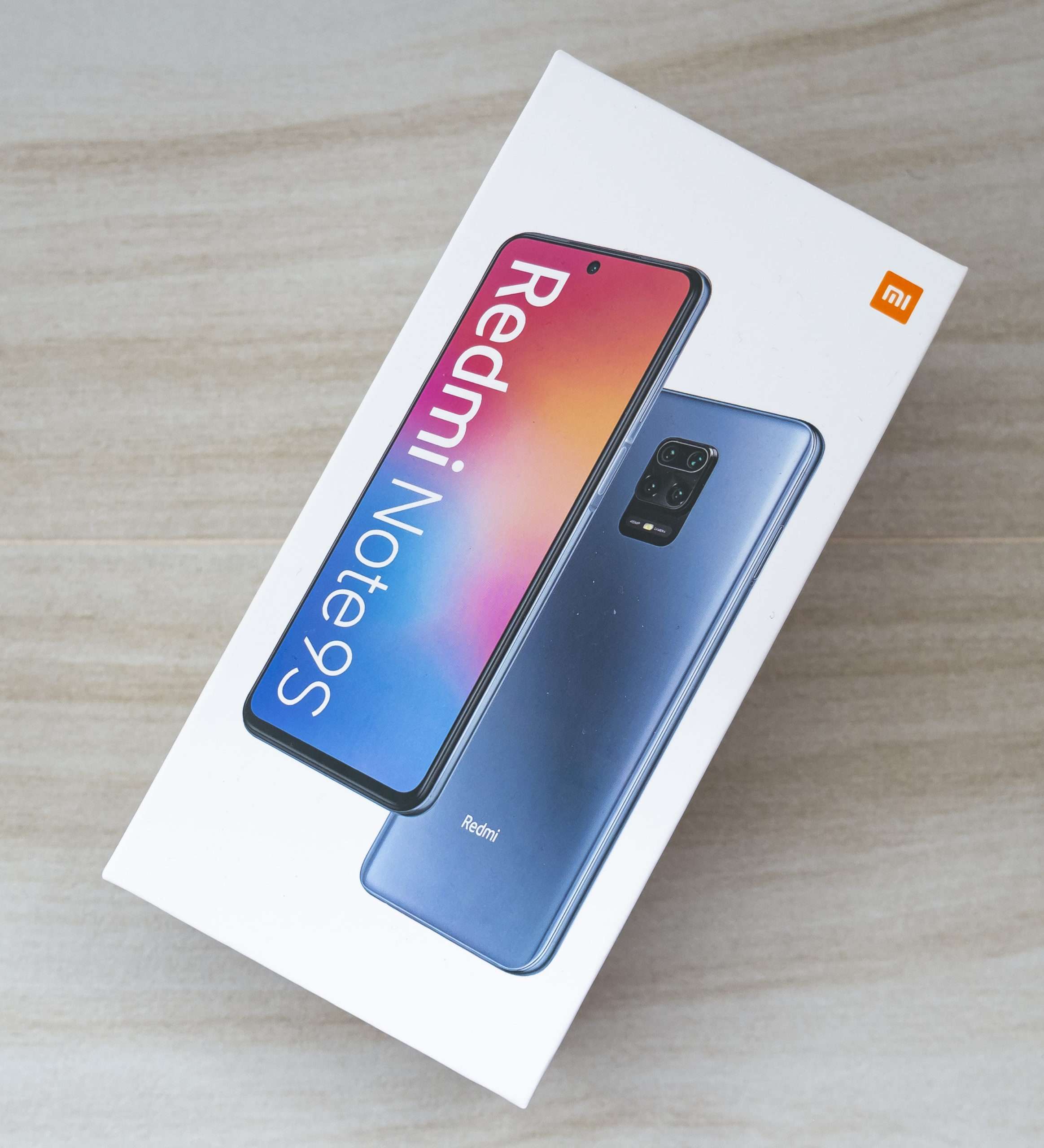 The Redmi Note 9S sports a 6.67-inch Full HD IPS display – the 2400 x 1080 resolution with a refresh rate of 60Hz, 450-nit brightness and LCD is make by huaxing. The”DotDisplay” with a hole-punch in the center and the punch-hole housing the 16MP selfie camera using Omnivision OV16A1Q sensor. The display, as well as the back panel, are protected under a layer of Gorilla Glass 5. It’s has the TÜV Rheinland-certified Eye Care Technology that includes Blue Light Filter technologies. The Blue Light Filter protects users from harmful blue light by reducing blue light emissions by up to 70 percent.

Redmi Note 9S comes with a IR Blaster. Infrared radiation blaster is present in most of the phones manufactured by Xiaomi which helps you to control your home appliances such as Television, AC with you Redmi device.

The new “Aura Balance Design,” and the massive 5,020mAh battery which easily lasts for three days. The rear has a shiny solid color finish but the way it reflects light creates a very striking effect. 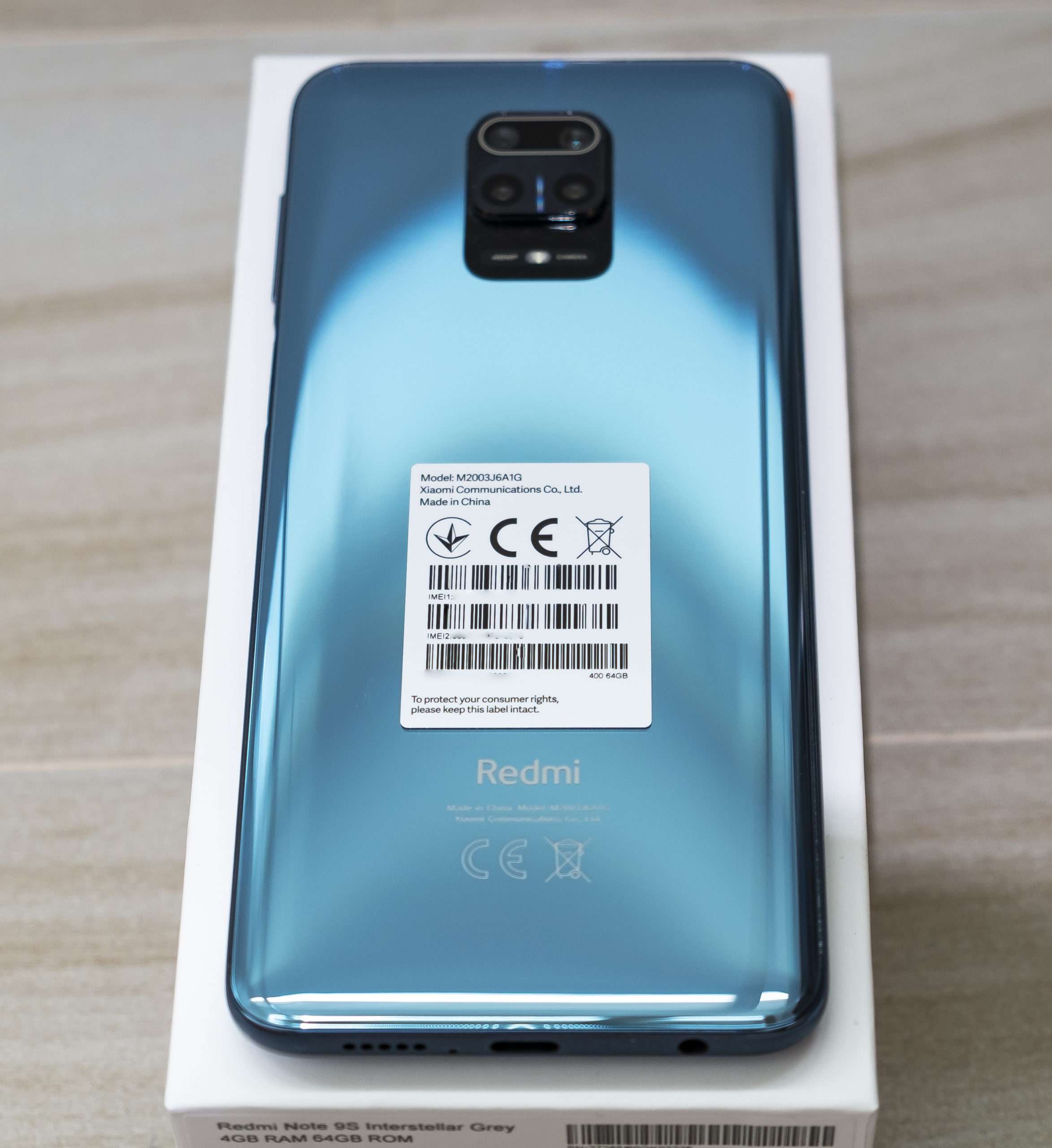 The bottom of the phone houses the USB-C port, 3.5mm headphone jack, and a bottom-mono speaker. For the charging support up to 18w and it’s too slow for 5020mah battery, can be use reversible to charge other devices. 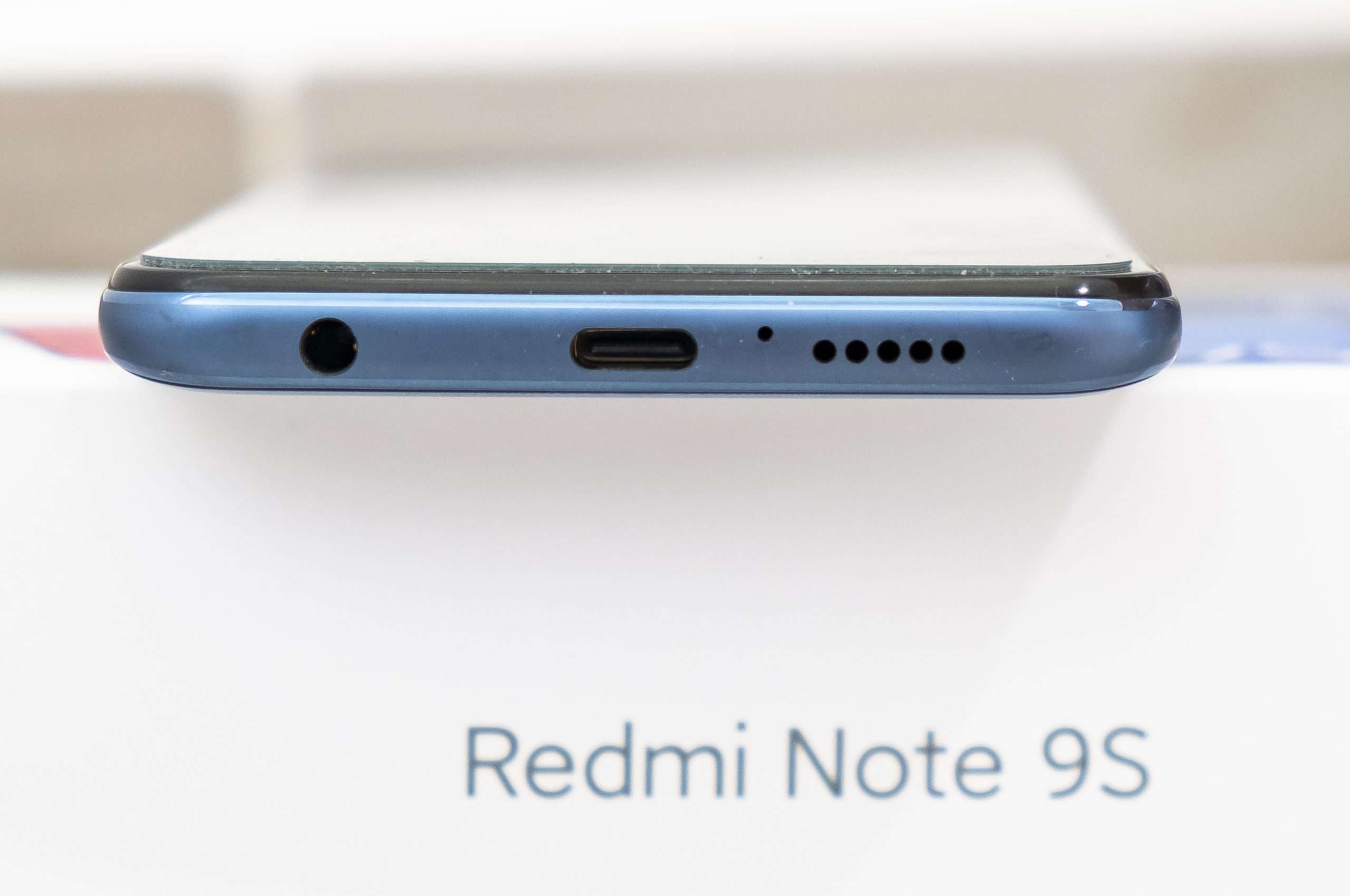 The rear camera comes with four separate modules. A 64MP primary wide-angle camera is accompanied by an 8MP ultra-wide with a 13mm-equivalent focal length and a 2MP dedicated depth sensor. There is no tele-camera, but the Redmi offers a 5MP dedicated macro camera. 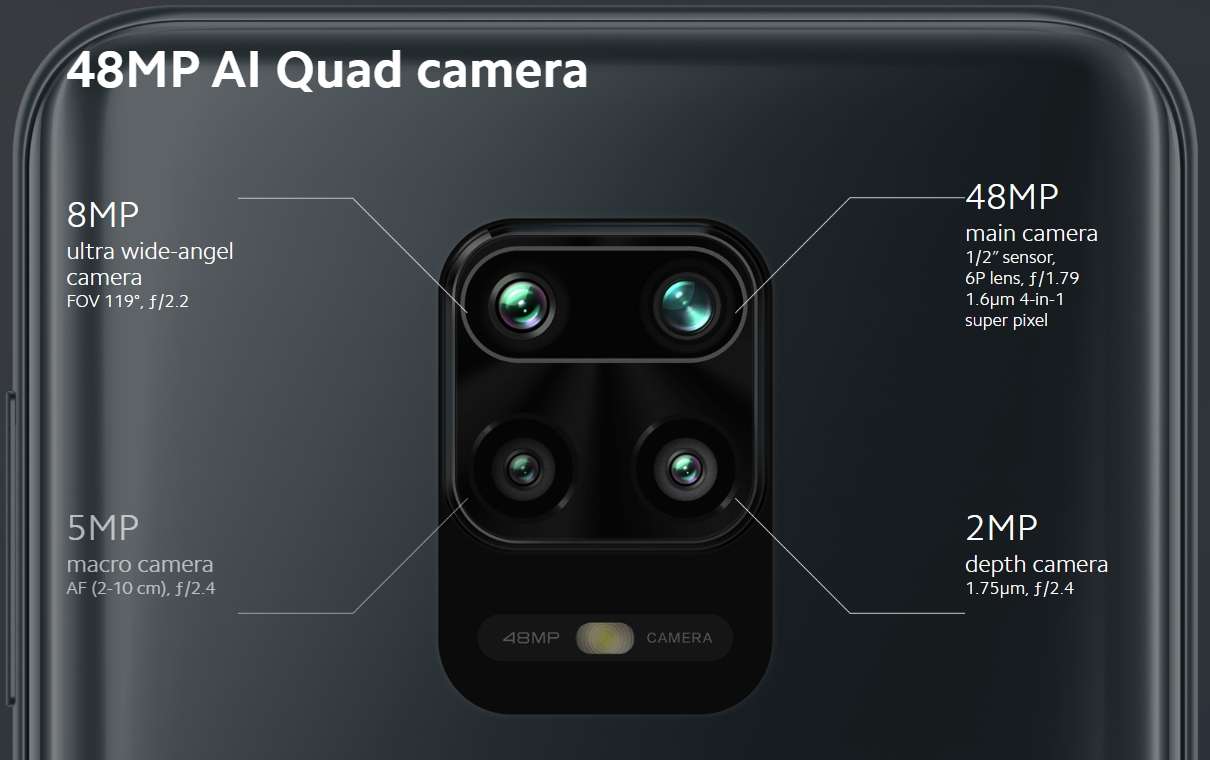 The phone comes with a 48MP Samsung ISOCELL Bright GM2 sensor. Besides the primary camera, there’s an 8MP wide-angle camera Omnivision sensor, a 5MP macro camera with autofocus Samsung sensor, and a 2MP depth sensor GalaxyCore sendor, in a square arrangement. The device can also record 4K videos at 30fps and super slow-mo videos at 960fps. Xiaomi also includes a super-detailed Pro mode in the camera app which works even in video mode. It also works with the ultra-wide angle sensor and the macro camera. The Redmi Note 9S uses the Qualcomm Aqstic WCD937X audio codec has an integrated DAC (Digital-to-Analog) converter that supports up to 192-kHz/24-bit playback. The audio codec also supports dual oscillators; the dual-clock design supports sampling frequencies 44.1kHz and 48kHz independently so your music files can be processed at native sampling rates without any conversion. 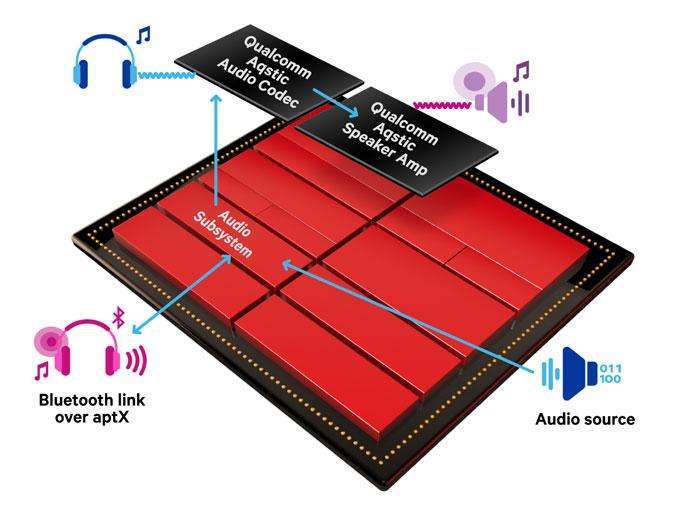 Qualcomm WCD9375 codec added an extra element of quality. To improve the audio, Qualcomm decided to work with a group of audiophiles called Golden Ears. These are people who are able to “identify the slightest distortions in the music, the characteristics of different digital filters, reverberation, colouring, panning, harmonics and more”.

This is actually a very rare skill and you have it trained or naturally. There are programs that must be followed to obtain Golden Ears certification and usually take years to complete. Most manufacturers that use Golden Ears are those that make really expensive audio products that sell for thousands of dollars. Qualcomm has now brought the same high quality to its smartphone codecs.

Qualcomm adjusted the WCD937x codec using comments from a Golden Ears group. They designed a digital audio filter to do this. This filter can also be customised so that OEMs can design it to meet different needs and have their own particular sound signature. Qualcomm says the latter is necessary as audio quality can be quite subjective. 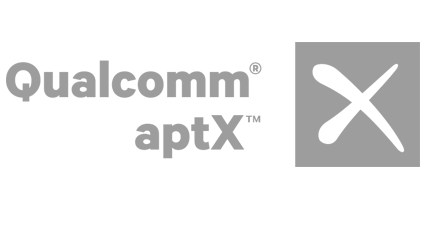 If you have a high definition Bluetooth “aptX” headset and you will be able to enjoy on the Redmi Note9s. Qualcomm aptX make use of the Bluetooth connection data pipeline to transmit bits of data between devices and the pipeline has a maximum width, it can flow large audio files to the device. AptX also solves the problem of sending pure audio wirelessly over Bluetooth by reducing the size of the audio files so they can be squeezed through the wireless pipeline without affecting the sound quality.
AptX supports music resolutions of up to 24-bit/96kHz which is actually better than the quality of audio stored on CDs which is 16-bit/44.1kHz. Qualcomm 720G GPS support 3 type of frequency –  L1 and L5 dual-frequency GNSS and the Indian Space Research Organization’s (ISRO) Navigation with Indian Constellation (NavIC) GPS constellation system. However, the NavIC only focuses on India and Isro considers it to be more accurate than GPS with position accuracy of 5 metre. NavIC is powered by dual frequency (S and L bands) while GPS is dependent only on L band making it more accurate than GPS.

The TPU case is surprisingly great. It has a hard-ish bump that goes over the camera which prevents scratches when you lie it flat on a table.

The Redmi Note 9S cameras are pretty good for the segment, but they’re not extraordinary. The primary 64 MP camera is quite good but don’t expect to beat high end phone.

The file size for 64MP is extremely large 20Mb.

The selfie camera have a very poor quality, but in door will be much better. 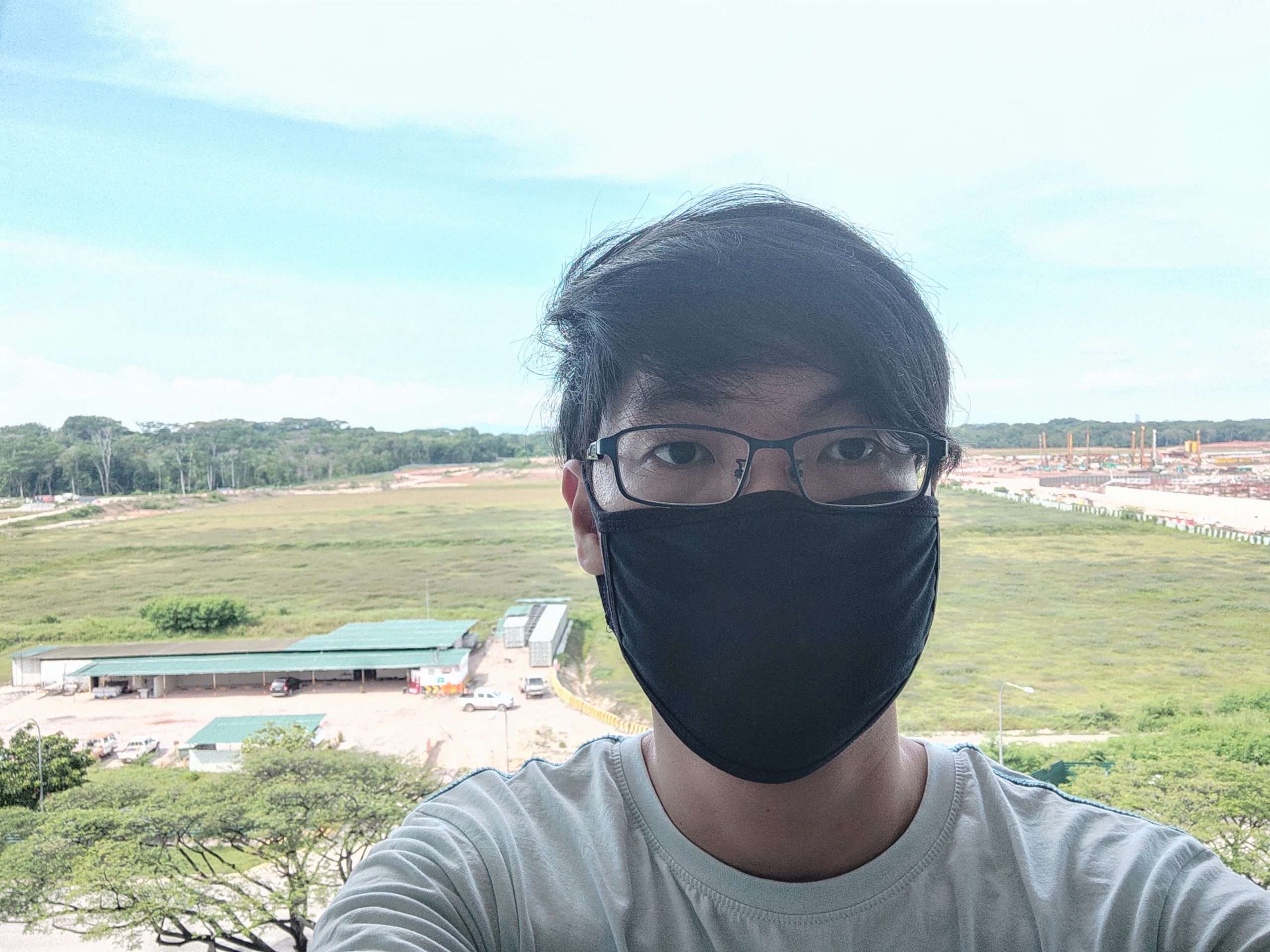 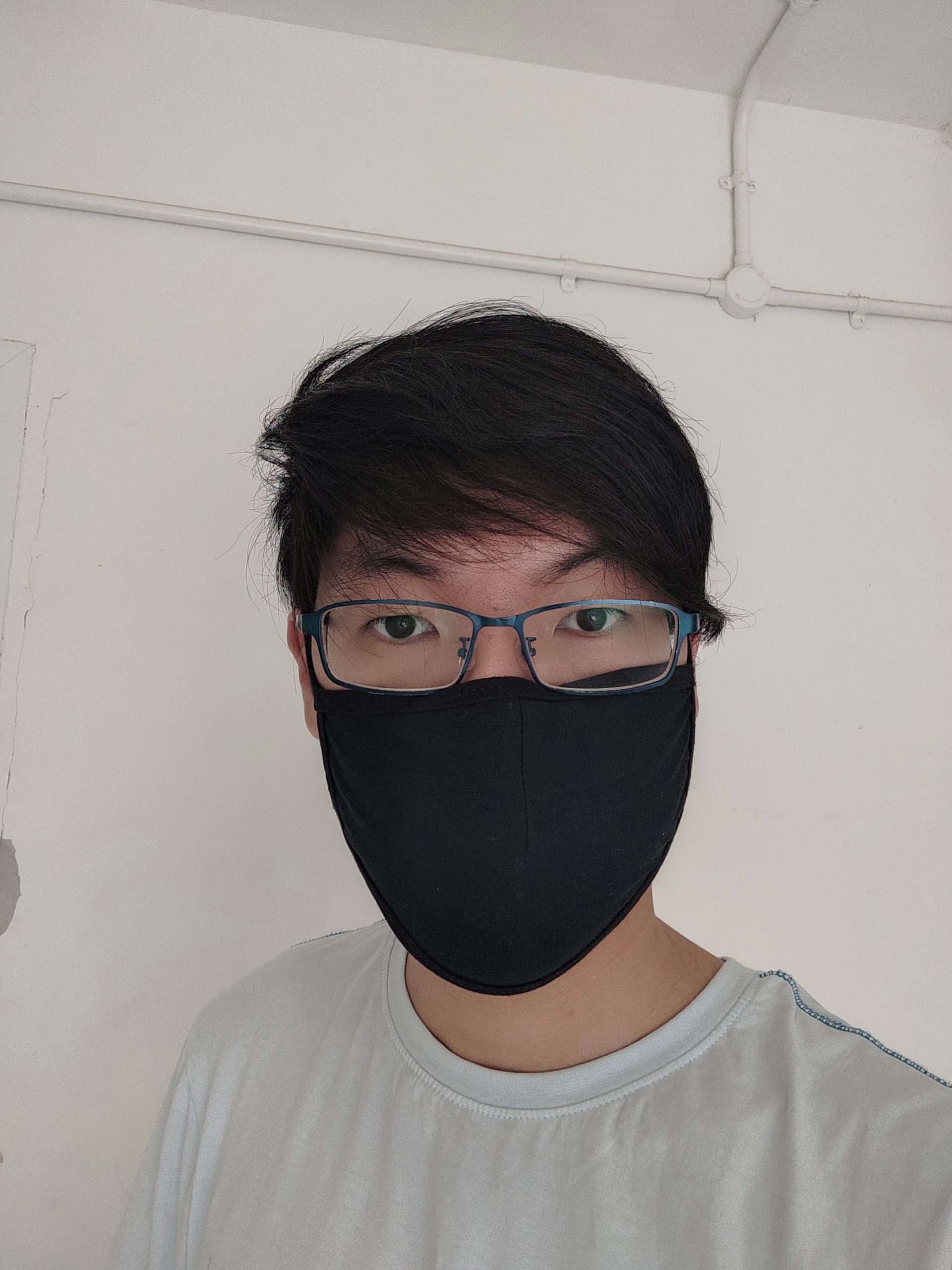 PCMark for Android introduces a fresh approach to benchmarking smartphones and tablets. It measures the performance and battery life of the device as a complete unit rather than a set of isolated components. And its tests are based on common, everyday tasks instead of abstract algorithms. 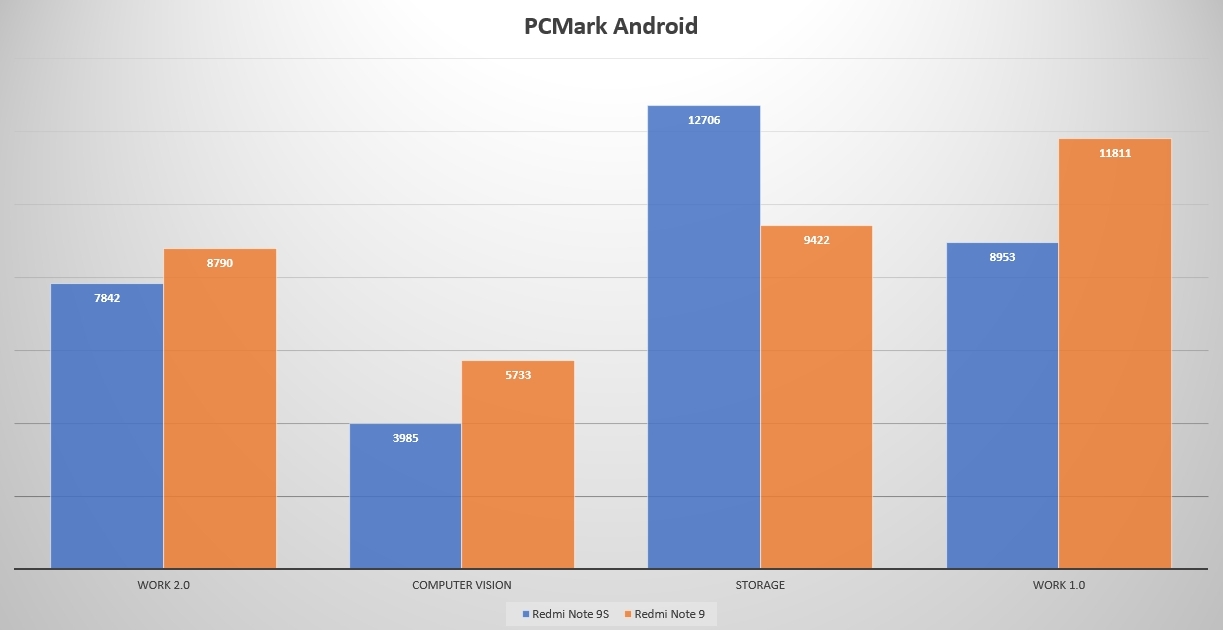 3DMark is used by millions of people, hundreds of hardware review sites and many of the world’s leading technology companies. It’s the industry standard benchmark for graphics performance measurement, a professional-grade tool available to home users for free.

Notice: 3Dmark fail to run on Redmi Note 9, due to Mediatek manipulate benchmark score and banned for 3Dmark.

Benchmark your phone, tablet or any other Android based device storage, including but not limited to SD cards, Multimedia cards, Internal device memory, RAM, USB flash drives and other storage media. 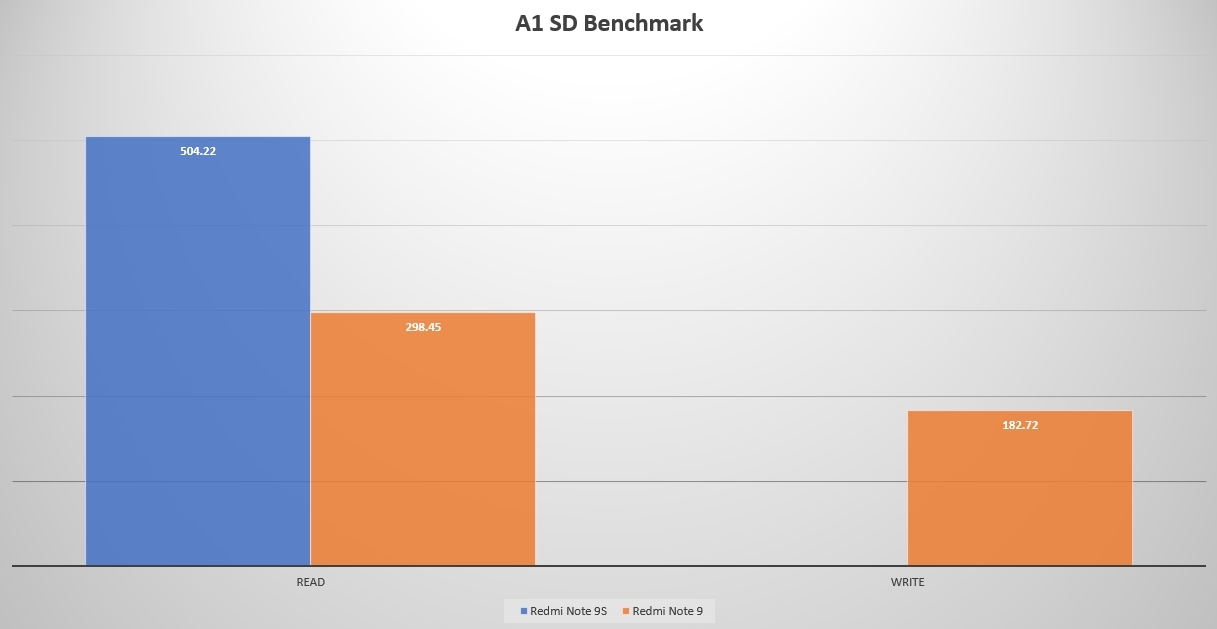