We’ve been addressing the topic widely in our reviews, it makes little sense for Ryzen processors that are that powerful to not perform as well in games in CPU bound situations. Microsoft now kind of confirms the issue that Windows 10 does not detect the simulated SMT threads properly, and the simulated SMT threads are weaker compared to real CPU cores. This could hinder the game performance.

In nothing more then a tweet Microsoft seems to have confirmed the existence of this issue. So basically each core gets an extra simulated thread, that is SMT (simultaneous multi-threading) or what Intel refers to as hyper-threading. A real core obviously is stronger compared to a virtual threaded one. Aka we are back to thread-scheduler bugs. Things remain a bit trivial we feel, when we disabled SMT in the BIOS (and just ran 8-threads) performance only increased marginally on some titles, with an exception for some. But who knows, titles like Rise of the Tomb Raider (which is hit the most) might benefit from properly threaded processors big-time. 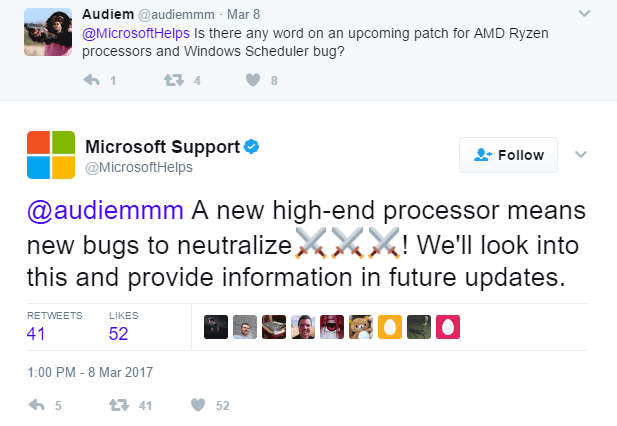 There’s more going on with the scheduler though, a weird fact exposed itself that the output of the diagnostic tools for the Windows 10 scheduler that distributes these computing tasks across cores, estimated an overly optimistic cache memory per core for Ryzen. A Ryzen 7 CPU seems to be recognized as a processor with a 136 MB combined cache, where it is in reality is obviously is 20 MB for L2 and L3 caches.

Meanwhile Windows 10 RTC seems to be disliking 0.25x multipliers, causing timing issues and Microsoft’s scheduler might not understand the different CCX core-to-core latencies either. So yes, most paths now lead back to the thread scheduler.

In short, the Windows thread-scheduler does not line up with the AMD Ryzen architecture.

Back in the days when Intel introduced Hyper-threading many similar issues have been addressed. From here on-wards it will be a waiting game as we’ll have to wait and see how Microsoft will address this matter and see what effect these two factors will have on the slightly disappointing game performance results. But sure, it is terrific news that Microsoft found an issue and is correcting it, let us hope that Microsoft sorts out the scheduler and cache issues as soon as possible. Maybe the upcoming Patch Tuesday update scheduled for March 14 will bring this coveted patch.