Xiaomi Smart Glasses are an engineer’s look into an advanced future.

Advanced MicroLED optical waveguide technology – the future is before your eyes

To match the form of ordinary glasses, subtle challenges on imaging and internal component arrangements must be overcome. Xiaomi Smart Glasses adopts MicroLED imaging technology to lower the design space needed in structural design, as well as the overall weight of the device.

In order to fit the imaging system seamlessly into the frame, MicroLED undoubtedly is the most optimal choice. Like OLEDs, MicroLEDs pixels are individually lit – its emissive property allows for brighter displays and deeper blacks. But MicroLEDs have a higher pixel density and longer lifespan while having a simpler structure. This allows for a more compact display, as well as easier screen integration.

Xiaomi Smart Glasses has a display chip measuring just 2.4mm x 2.02mm. Under a microscope, the display is roughly the size of a grain of rice, with individual pixels sized at 4μm—enabling the display to be fitted perfectly within the frame of the glasses. To allow sufficient light to pass through complicated optical structures before reaching the eye even in harsh direct sunlight, we opted for an ultra-efficient monochrome display solution, which is capable of reaching a peak brightness of 2 million nits.

By adopting optical waveguide technology which refracts lights at 180°, the MicroLED display accurately transmits light beams to the human eye through the microscopic grating structure of the optical waveguide lens.

The grating structure etched onto the inner surface of the lens allows light to be refracted in a unique way, directing it safely into the human eye. The refraction process involves bouncing light beams countless times, allowing the human eye to see a complete image, and greatly increasing usability while wearing. All this is done inside a single lens, instead of using complicated multiples lens systems, mirrors, or half mirrors as some other products do. Optical waveguide technology significantly reduces device size and weight, and therefore allows smart glasses to approach the form factor of traditional glasses.

NOT A “SECONDARY SMARTPHONE DISPLAY” BUT AN INDEPENDENT SMART WEARABLE

Xiaomi Smart Glasses integrates a total of 497 components including miniature sensors and communication modules, so it is not just a “second screen” for your smartphone, but instead functions as a new smart terminal with independent operating capability. In addition to basic notification, call display, etc., it can also independently complete functions such as navigation, taking photos, teleprompter, and real-time text and photo translations. Considering usage, key interaction logic has also been implemented to minimize interruptions at inconvenient times, and display important information timely when critical.

We need to build an interaction logic which “does not disturb ordinary use, but displays key information in a timely manner”. After many in-depth discussions, several key scenarios including “key notification”, “phone call”, “navigation”, and “photo translation” were finally confirmed, with XiaoAi AI Assistant as the primary interaction method. In this way, Xiaomi Smart Glasses can “display the most important information at the moment it is needed”.

With “Notifications” as an example, it is obviously inappropriate to display all push notifications from your smartphone in front of your eyes. Therefore, Xiaomi Smart Glasses selects and pushes the most important messages, such as smart home alarms, urgent information from office apps, and messages from important contacts, etc., to avoid excessively disturbing users.

“Phone call” is the most natural use scenario for smart glasses, and you will be able to see the other party’s number when they call you. Using the built-in dual beamforming microphone and speaker, both parties can hear each other clearly.

“Navigation” is very useful in driving and cycling scenarios. Xiaomi Smart Glasses can present roads and maps in front of you in real time so that you can keep your eyes on the road safely and conveniently. 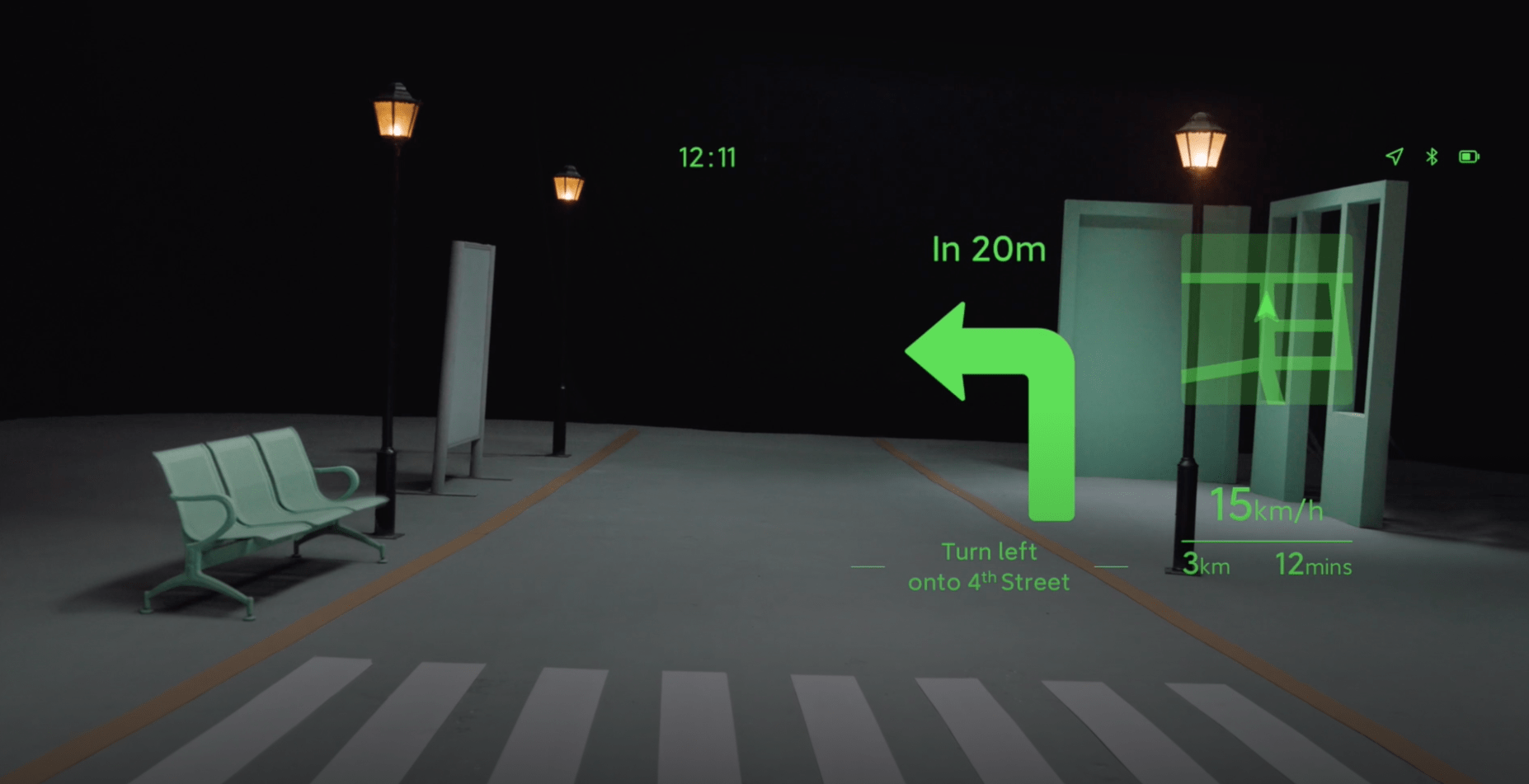 The 5MP camera on the front of the glasses can also take photos and translate text in photos, which is highly convenient when traveling. By utilizing the built-in microphone and proprietary translating algorithm, Xiaomi Smart Glasses is capable of transcribing audio into text with translations in real time. The indicator light next to the camera will illuminate when the camera is in-use to indicate that photos are being taken.

To achieve this high-level of functionality, the glasses need to be equipped with a quad-core ARM processor, battery, touch pad, Wi-Fi/Bluetooth modules, Android operating system, and more. Even with all these features, the device weighs only 51g. All this makes it possible for Xiaomi Smart Glasses to resemble traditional glasses form factor, but surpass other existing smart glasses in function.

It was said “Any sufficiently advanced technology is indistinguishable from magic.” Xiaomi Smart Glasses use an engineering mindset to create a future viewpoint.