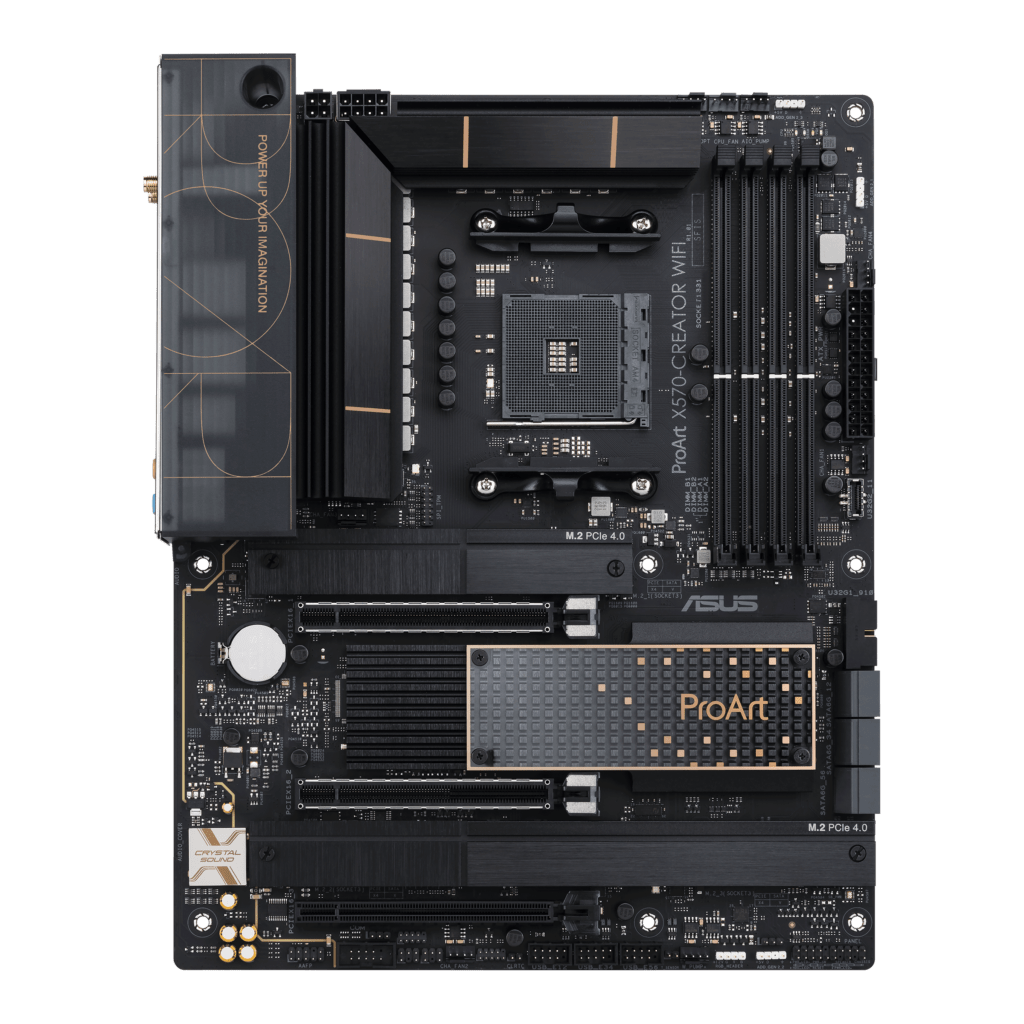 The ROG Crosshair VIII Extreme and ROG Strix X570-E Gaming WiFi II offer the new ASUS-exclusive Dynamic OC Switcher for those looking to get the most out of the AMD Ryzen™ CPU under all workloads. Until now, manually overclocking a Ryzen CPU meant maximizing all-core clock speeds at the expense of the high light-load boost clocks that are so important for general system responsiveness.

Dynamic OC Switcher lets overclockers have the best of both worlds. When this feature is enabled, compatible motherboards will automatically switch between pushing light-load clocks to the limit with AMD Precision Boost Overdrive and multi-core clocks to the max with a user’s chosen manual overclock settings. Dynamic OC Switcher is also available on the previously introduced ROG Crosshair VIII Dark Hero motherboard.

The inclusion of BIOS FlashBack™ enables firmware updates with a USB stick even when a CPU or memory isn’t installed. In addition, ASUS Q-Fan software allows users to tweak fan curves for the best balance of noise and airflow. Cooling is further aided by dedicated AIO headers and hybrid fan headers that can detect and work with both DC and PWM fans. The motherboards provide exceptional audio, thanks to the use of high-quality audio chips and Two-Way AI Noise-Canceling technology. And for aesthetics, Aura Sync RGB lighting and Gen 2 addressable headers with advanced auto-detection features combine to give any build a unique look.

The ROG Crosshair VIII Extreme holds nothing back

The ROG Crosshair VIII Extreme boasts the highest-end hardware ever put in an ASUS X570 motherboard. The VRM has a 18+2 stage design with 90-ampere power stages for clean, efficient power delivery to drive the 16-core AMD Ryzen 9 5950X processor. Cooling is handled by a pair of large aluminum heatsinks that are connected by a heatpipe to ensure rapid and even heat dissipation. The forged aluminum I/O cover not only adds to the board’s aesthetics, it’s also an integral part of the VRM heatsink by increasing the surface area for heat exchange. The M.2 heatsink at the center of the motherboard features the 2-inch LiveDash OLED display that shows vital system stats like temperatures and voltages, or it can display custom graphics and animations. The Crosshair VIII Extreme includes all the cooling and overclocking features hardcore enthusiasts demand. Voltage measurement points, onboard controls, mode switches and the Q-Code POST boot code display provide an overview during overclocking.

The Crosshair VIII Extreme can handle up to five PCIe® 4.0 SSDs: one under the upper M.2 heatsink, two under the lower M.2 heatsink, and another two vertically mounted on the exclusive DIMM.2 card. The SSD’s proximity to the heatsinks ensures optimal temperatures for sustained performance. Each SSD is easily secured by the new Q-Latch mechanism.

The multitude of connectivity options offered by the Crosshair VIII Extreme include 10G and 2.5G Ethernet, WiFi 6E and Bluetooth® 5.2. It also features two Thunderbolt 4 ports that offer up to 40 Gbps of bandwidth apiece, as well as a DisplayPort™ for single-cable monitor connections. Eight USB 3.2 Gen 2 Type-A connectors offer 10 Gbps of bandwidth each to cater to high-speed peripherals, with one of the connectors supporting BIOS FlashBack for easy firmware upgrades. A Clear CMOS button and audio outputs including S/PDIF can be found on the back panel I/O. There are also internal headers for up to four USB 3.2 Gen 1 Type-A and two USB 3.2 Type-C® ports, with one of the Type-C ports offering 60 W Power Delivery 3.0 for fast charging of devices.

For users looking to create elaborate cooling rigs, the Crosshair VIII Extreme includes four standard fan headers, two pairs of connectors for pumps and radiators, plus two HydraNode headers that can power and monitor up to three compatible fans each. The connectors include liquid input, output and flow sensors to allow builders with custom loops to monitor the state of their setup. Builders can also look forward to more customization possibilities with the inclusion of three Gen 2 addressable RGB LED headers, a standard four-pin RGB connector and an ARGB splitter.

The ASUS ProArt X570-Creator WiFi is the first ASUS ProArt motherboard to use the X570 platform. It delivers maximum performance and stability for users who depend on their PC or workstation to make a living: 3D artists, CAD and CAM designers, audio and video producers, and even software developers.

The 14+2 power design of the motherboard’s VRM and ProCool II solid-pin power connectors make it ready for the most powerful Ryzen CPUs. Large heatsinks cover the VRM power stages, X570 chipset and three M.2 slots, and the inclusion of the Q-Latch mechanism allows for tool-free installation of NVMe drives.

The ProArt X570-Creator WiFi features copper accents that stand out against the pure black motherboard hardware. Users can customize the look of their build via the three Gen 2 addressable RGB headers and the standard RGB strip connector.

In terms of software, the ProArt X570-Creator WiFi includes the ASUS Control Center Express remote IT asset monitoring and management software, plus the ProArt Creator Hub application that enables users to monitor and optimize the system, as well as control color calibration for compatible monitors.

The ROG Strix X570-E Gaming WIFI II motherboard builds on the legacy of its predecessor, offering a combination of high-end components, smart software and passive chipset cooling on a single board. The CPU VRM features a 12+4 stage design with ProCool II 8+4 pin auxiliary connectors.

Like the top-end ROG Crosshair VIII Extreme motherboard, the Strix X570-E Gaming WiFi II features exclusive Dynamic OC Switcher technology to help users get the most out of the Ryzen CPU, regardless of workload. Additionally, the onboard Q-Code display, diagnostic LEDs and OptiMem II trace layout help overclockers achieve peak performance. To keep things cool, there are ample cooling options with five fan headers plus a dedicated AIO and pump headers. The PCIe 4.0 M.2 slots at mid-board and below the chipset heatsink can accept storage devices up to 110 mm long, and both come padded with thick aluminum heatsinks.

WiFi 6E and Bluetooth 5.2 offer easy connectivity with the latest routers and peripherals, with 2.5G and gigabit Ethernet ports still available for those who prefer a wired connection. The rear panel boasts seven USB 3.2 Gen 2 Type-A and one USB 3.2 Gen 2 Type-C ports. Onboard headers can provide another USB 3.2 Gen 2 port, along with two USB 3.2 Gen 1 and four USB 2.0 connectors. There are two Gen 2 addressable headers and a pair of standard RGB connectors. 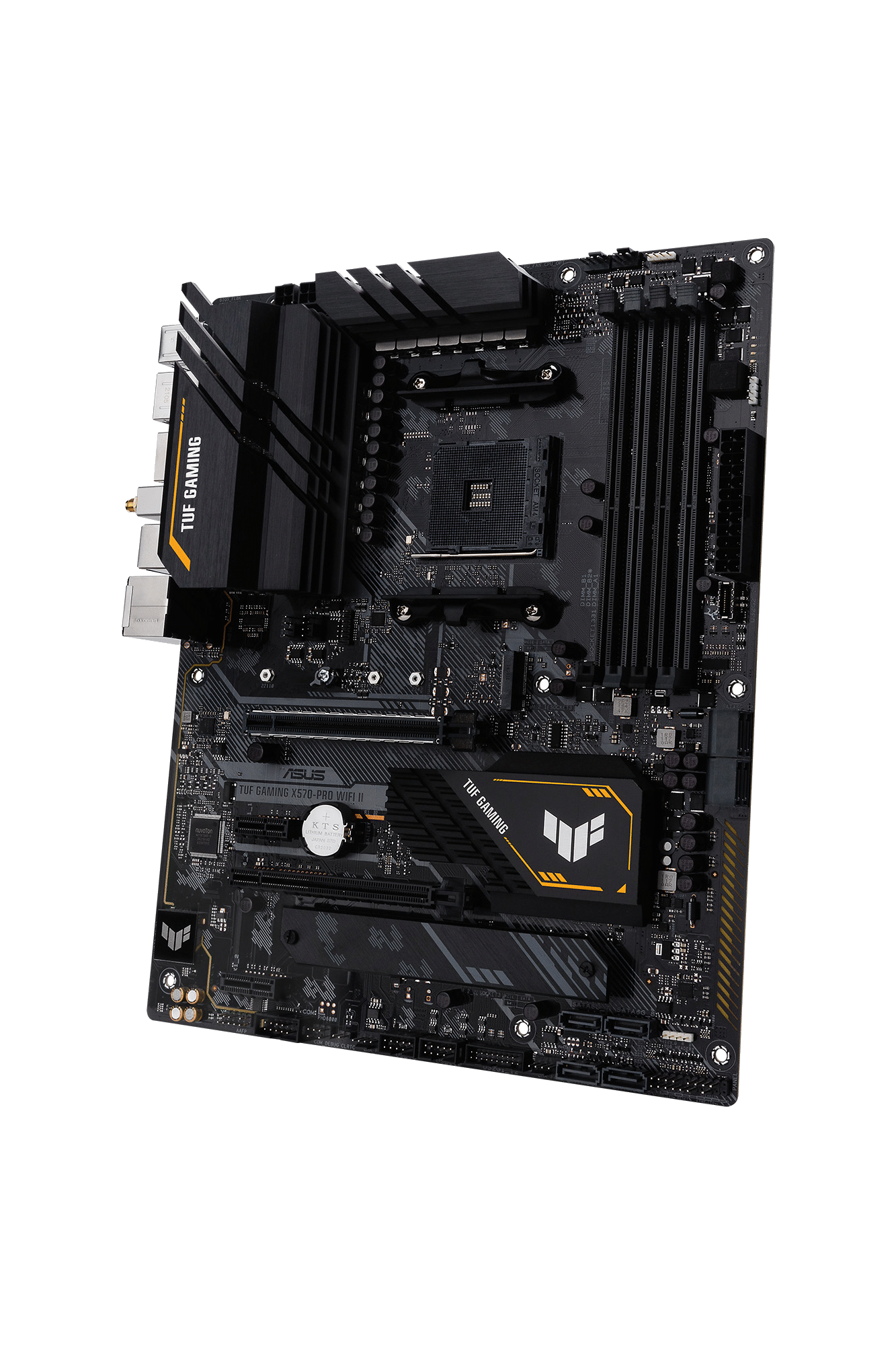 The TUF Gaming X570-Pro WiFi II motherboard features a 12+2 DrMOS VRM and 8+4 pin ProCool auxiliary power connectors. The large aluminum VRM heatsinks and a new passive chipset heatsink keep both the CPU and the X570 chipset cool for sustained performance without throttling. The main metal-encased PCIe slot and both M.2 slots are all connected with PCIe 4.0 for maximum available bandwidth. Each slot includes the Q-Latch mechanism to easily secure each SSD in its place. For networking, the TUF Gaming X570-Pro WiFi II features 2.5G Intel® Ethernet, WiFi 6E and Bluetooth 5.2.

Users can enhance the aesthetics of their TUF Gaming X570-Pro WiFi II build via one Gen 2 addressable and two standard RGB headers. Four fan headers and a dedicated AIO header allow for the creation of any mainstream cooling setup with ease.