Singapore, September 2, 2020 — ASUS Republic of Gamers (ROG) today announced an all-new lineup of gaming gear at the Meta Buffs online launch event. Aligning with the event theme, the new products are all meta buffs: status enhancements that are lighter, faster and more powerful for taking gaming experiences to a new level.

The lineup features the new ROG Strix GeForce RTX™ 30 Series graphics cards, which unleash an amped-up thermal design and chart-topping performance with the NVIDIA® Ampere architecture. The new NVIDIA GeForce RTX 30 Series GPUs, the 2nd generation of RTX, feature new RT Cores, Tensor Cores and streaming multiprocessors, bringing stunning visuals, amazingly fast frame rates and AI acceleration to games and creative applications. Powered by the NVIDIA Ampere architecture, which delivers increases of up to 1.9X performance-per-watt over the previous generation, the RTX 30 Series effortlessly powers graphics experiences at all resolutions, even up to 8K at the top end. The GeForce RTX 3090, 3080 and 3070 represent the greatest GPU generational leap in the history of NVIDIA.

“Recently, people are spending much more time at home working, learning and playing. With a greater focus on doing what they enjoy the most, a lot of gamers have aspired to level up by adding peripherals or upgrading their PC components,” said Jackie Hsu, ASUS Senior Vice President and Co-Head of the Open Platform Business Group and AIoT Business Group. “For all of you looking to gain an advantage in gaming, ROG is here to upgrade your gaming experiences with meta buffs.”

By providing gamers with this lineup of meta buffs for optimal gameplay and potent status enhancements, ROG is delivering ultimate gaming experiences and the power to conquer the competition. From top to bottom, ROG Strix GeForce RTX 30 Series graphics cards deliver the next wave of innovations in thermal design and accommodate the dynamic NVIDIA Ampere architecture. A new shroud with metal accents encompasses a trio of Axial-tech fans that have been tuned to fulfill specialized purposes. The center fan leverages a full-height barrier ring and 13 fan blades to provide boosted static pressure that drives air through the heatsink fins and onto the GPU heat spreader. The two outer fans feature 11 blades each and half-height barrier rings to allow for more lateral dispersion and to provide better airflow through the cooling array. Turbulence between fans is reduced due to a reversal of the center fan’s rotational direction.

A larger heatsink that fills most of the card’s 2.9-slot footprint was designed to leverage the increased airflow. To get heat up off the die and into the heatsink array, MaxContact technology has been utilized to polish the surface of the heat spreader and improve smoothness at the microscopic level. The extra flatness allows for better contact with the die for enhanced thermal transfer. Not only has the cooling array been enhanced, but top-shelf capacitors, chokes and power stages effortlessly deliver hundreds of watts at a millisecond’s notice. ROG Strix GeForce RTX 30 Series graphics cards feature Super Alloy Power II components that have been soldered to the PCB using Auto-Extreme technology — an industry-exclusive automated manufacturing process — to ensure each card meets rigorous ROG specifications for quality and reliability.

Also included are FanConnect II headers that allow PWM fans to be tuned based on CPU and GPU temperatures, providing extra intake or exhaust for demanding 3D tasks and compute workloads. Builders looking for a quick and simple way to adjust the card’s default behavior can flick an onboard Dual BIOS switch to choose between “performance” and “quiet” profiles without software. Another ease-of-use feature is an onboard voltage sensing circuit that monitors PSU rail voltage. The circuit is fast enough to catch any transients that result in the rail voltage dropping too low. If that happens, a red LED will light up to indicate a power supply issue, making it easier to debug the source of crashes during gameplay.

The front side of the GPU has also been buffed up. An addressable RGB element can be customized with the Armoury Crate software utility and the graphics card’s reinforced metal frame adds a literal layer of durability. Flipping the card around reveals a metal backplate with a wide vent. The vent allows hot air to escape towards chassis exhaust fans instead of being recycled back into the GPU cooler. Beneath the GPU, a bracket provides consistent mounting pressure between die and heat spreader. Stainless steel is used for the I/O bracket to protect ports and provide a more secure mount. 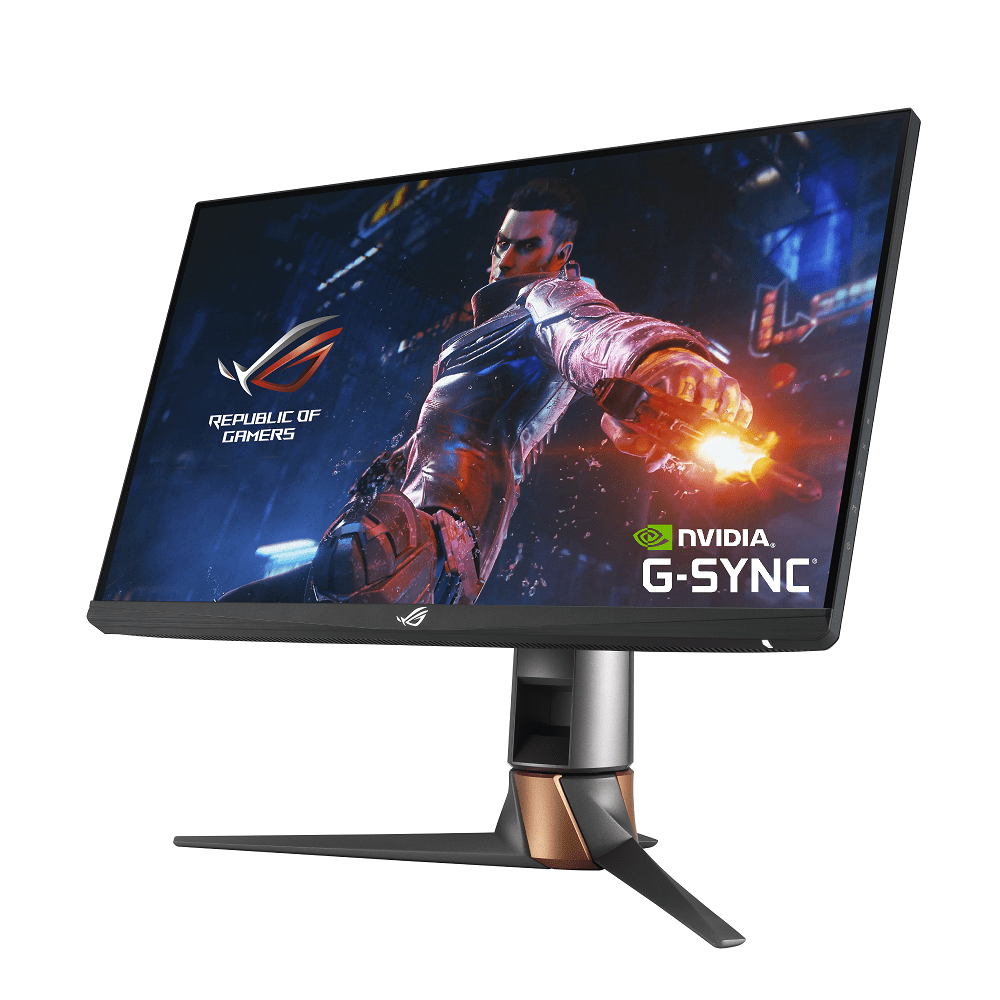 ROG Swift 360Hz PG259QN and PG259QNR are the world’s fastest esports gaming monitors with refresh rates of up to 360 Hz. The astounding 360 Hz refresh rate offered by ROG Swift 360Hz PG259QN and PG259QNR delivers up to 50% more frames per second than 240 Hz gaming monitors, giving gamers an edge over the competition. The 24.5-inch FHD (1920 x 1080) display features Fast IPS panel technology. The liquid crystal elements in the display turn on and off up to four times faster than conventional IPS panels for a superfast 1 ms gray-to-gray (GTG) response time. The display is also HDR10 compatible for color and brightness that exceed that of ordinary monitors, treating gamers to ultrarealistic graphics. A built-in NVIDIA® G-SYNC® processor provides full variable refresh rate (VRR) range and variable overdrive for ultrasmooth gaming visuals with no tearing, stuttering or input lag.

Reflex Latency Analyzer is a revolutionary system latency measurement tool integrated in new ROG Swift 360Hz PG259QNR NVIDIA G-SYNC Esports displays. PC performance for competitive gaming is about responsiveness—how quickly the display updates after mouse clicks or movements. The Reflex Latency Analyzer detects clicks coming from the mouse and then measures the time it takes for the resulting pixels (i.e. a gun muzzle flash) to change on screen. This type of measurement has been virtually impossible for gamers to do before now, requiring over $7,000 in specialized high-speed cameras and equipment. Reflex Latency Analyzer provides a much more complete and accurate understanding of mouse, PC and display performance. Now with Reflex Latency Analyzer, gamers can start a match with confidence, knowing their system is operating exactly as it should be.

In addition to the Reflex Latency Analyzer, ROG Swift 360Hz PG259QNR also comes with an ROG Desk Mount Kit that saves ample desk or table space. ROG Desk Mount Kit can be switched with the monitor stand in only three simple steps and has a C-clamp that opens up to 80 mm wide for compatibility with most desks.

ROG Strix XF 120 is a versatile 120-mm 4-pin pulse-width modulation (PWM) cooling fan that has been tested and verified to deliver optimized acoustic profiles across a range of performance demands. It delivers 62.5 cubic feet per minute (CFM) airflow and 3.07 mm H2O static pressure, which provides the flexibility to use ROG Strix XF 120 for static pressure applications, including as a CPU cooler or radiator, or for chassis cooling. For further cooling power, its small fan hub allows greater space for airflow, and the aerodynamic fan blades and curvature of the frame struts help direct air throughput to minimize turbulence and maximize airflow.

ROG Strix XF 120 features magnetic-levitation technology that reduces friction when the fan rotates for a quiet acoustic profile and 400,000-hour longevity, while the specially grooved blades and an anti-vibrating design further reduce noise. With an extensive operating range of 250 to 1800 RPM, the fan can be adjusted to as low as 250 RPM and even automatically turns off when set to 0% PWM duty cycle for an ultralow noise profile and super-efficient cooling. 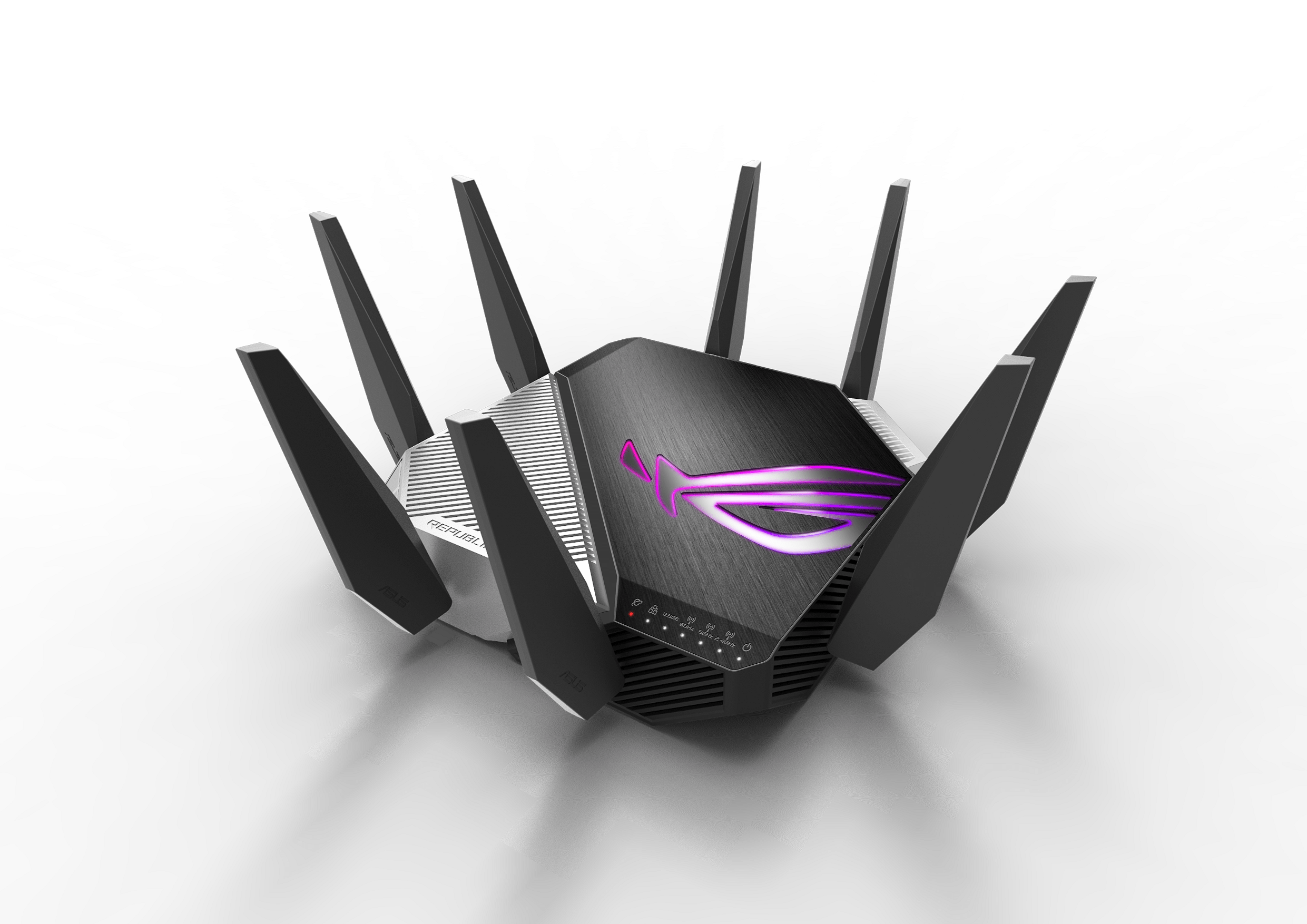 ASUS is an established leader in the networking market and was the first to launch a WiFi 6 router. Now ASUS is delivering the wider bandwidth and increased 160 MHz channels of WiFi 6E with ROG Rapture GT-AXE11000, the world’s first WiFi 6E router. With a tri-band design and 802.11ax WiFi 6E connectivity, ROG Rapture GT-AXE11000 supports speeds of up to 11,000 Mbps and features WAN aggregation for WAN speeds of up to 2 gigabits per second. With 4×4 WiFi 6 and a 2.5 gigabit-per-second LAN port, both wired and wireless networks can achieve speeds of more than 1 gigabit per second, bringing true multi-gigabit performance to life. GT-AXE11000 is powered by a quad-core 1.8 GHz 64-bit CPU with 1 gigabyte of RAM, so it can handle heavy traffic in WiFi 6E networks. The router also uses the latest 6 GHz power amplifier to improve both the signal coverage and quality.

WiFi 6E technology takes advantage of the newly available radio spectrum in the 6 GHz band, which has three-times more bandwidth than the 5 GHz band. It also adds seven extra 160 MHz channels to the current WiFi 6 standard, provides lower latency, and will be dedicated to WiFi 6E devices for maintaining high speeds that will not be affected by legacy devices. ROG Strix Scope RX is the first mechanical RGB gaming keyboard to debut ROG RX Red Optical Mechanical Switches, which are the first in the world to feature a hollow-square stem design with embedded RGB LEDs for all-round per-key lighting. The unique design of each switch delivers a near-zero debounce delay to ensure instantaneous activation the moment a key is pressed. The hollow-square stem and X-stabilizer mechanism provide consistent wobble-free keystrokes, while the 100-million-keypress lifespan ensures extreme durability.

ROG Strix Scope RX provides an alloy top cover and IP56 water and dust resistance to further ensure durability and longevity. It comes ready for the action of first-person shooter (FPS) games with an extended Ctrl key for ‘Crouch,’ and other commands. A USB 2.0 port can be used as a passthrough for device charging and external storage. The Stealth key hides all apps and mutes audio for instant privacy, and the quick-toggle switch quickly changes between functions and media inputs. The keyboard also features a backlit ROG logo and customizable lighting effects. The Armoury Crate software utility allows users to customize user profiles, map keys, record macros and even track hardware stats during gameplay. 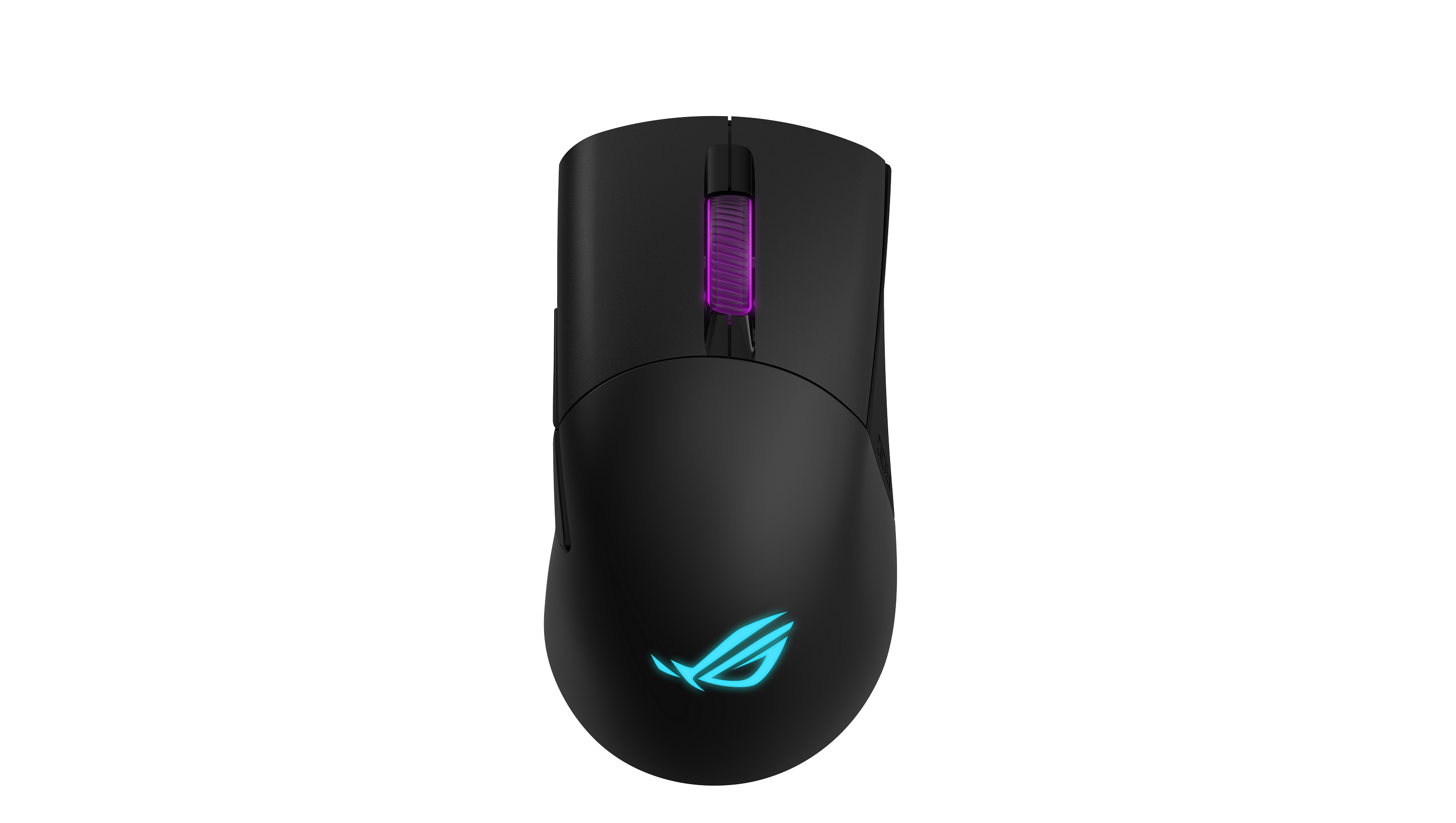 Featuring tri-mode connectivity, ROG Keris Wireless gives gamers a choice of using an ultrafast 2.4 GHz wireless, energy-efficient Bluetooth® LE, or wired USB when the battery needs to be topped up. The high-speed sensor has been specially tuned by ROG to have 16,000 dpi sensitivity, 400 ips and 40 g acceleration for premium precision and swiftness. ROG Keris Wireless also features the ROG-exclusive push-fit switch-socket design with the new ROG Micro Switch, which offers 70-million-click durability and a gold-plated electro junction for longevity.

ROG Delta S weighs just 300 grams and has ergonomic D-shaped ROG Hybrid ear cushions for unmatched comfort during extended gaming sessions. Its USB-C® connector allows users to play on a PC and then jump to a gaming console or mobile device without having to change headsets. Customizable, circular RGB lighting can be used with other Aura Sync-enabled gear and unique soundwave lighting effects flash in tune with the user’s voice.

ROG Scabbard II is an extended gaming mouse pad that offers ample space for a keyboard, mouse and other gaming gear, making it the ideal battle stage for gaming. It is made out of durable fabric with a military-grade nano-coating that repels water, oil and dust, giving gamers an optimal mouse gliding surface. Featuring anti-fray, narrow-stitched edges and a non-slip rubber base, ROG Scabbard II is a gamer’s best ally.

Availability and pricing will be announced individually nearing the local launch date.